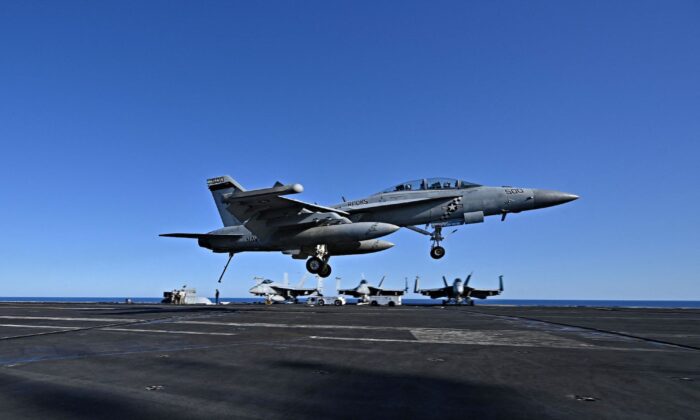 The U.S. Navy announced Monday that it recovered an F/A-18E Super Hornet jet from the bottom of the Mediterranean Sea after it was blown overboard from the USS Harry S Truman aircraft carrier in sudden heavy weather on July 8.

A task force recovered the aircraft from a depth of around 9,500 feet using a CURV-21 remotely operated vehicle which attached specialized rigging and lift lines to the aircraft.

The CURV-21 raised the Super Hornet to the surface and hoist it aboard MPV Everest, an offshore supply ship operating as a contractor, on Aug. 3. The CURV 21 is 6,400-pound designed for the Navy’s deep-water salvage operations and can be used at up to 20,000 feet.

The F/A-18E Super Hornet is now on its way to a nearby undisclosed military installation before being transported to the United States. The U.S. Navy said the operation demonstrated its capabilities to conduct deep-water search and recovery operations worldwide.

“Inherent to Task Force 68 is our ability to adapt to any mission set—we can rapidly mobilize and deploy scalable command, control, and communications, in order to seamlessly integrate and provide forward command and control when and where needed,” said CTF 68 Commodore, Capt. Geoffrey Townsend in a statement.

The U.S. Navy initially announced the incident on July 10, saying the F/A-18E Super Hornet “blew overboard due to unexpected heavy weather” while the carrier was conducting a replenishment at sea.

One crewman was said to have suffered minor injuries but was expected to make a full recovery.

“Our task tailored team operated safely and efficiently to meet the timeline. The search and recovery took less than 24 hours, a true testament to the team’s dedication and capability.”