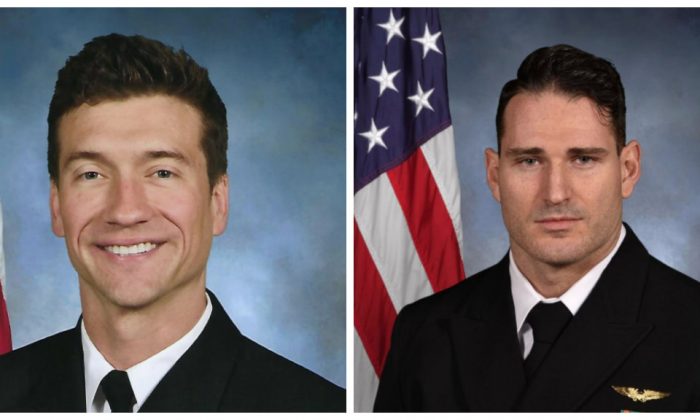 US Navy Identifies Two Aviators Who Were Killed in Florida Crash

The identities of two U.S. Navy aviators who were killed when their fighter jet crashed off the coast of Key West, Florida, on March 14 have been confirmed.

Lt. Cmdr. James Brice Johnson and Lt. Caleb Nathaniel King, both Florida residents, were operating an F/A-18F Super Hornet on a training mission when it crashed near the naval air station, according to a statement released on March 15.

They were declared dead shortly after they were recovered in the water.

Both pilots were assigned to the “Blacklions” of Strike Fighter Squadron Two One Three (VFA-213), based at Naval Air Station Oceana in Virginia.

VFA-213’s commanding officer, Cmdr. Kevin Robb, said the entire Blacklion family was grieving the loss of the two aviators who were described as “exceptional.”

“The entire Blacklion Family is grieving the loss of two great Americans. Lt. Cmdr. Johnson and Lt. King were phenomenal young men, exceptional naval aviators, and were living models of what honor, courage and commitment really mean,” Robb said in the statement.

Johnson, a naval aviator, was a 2007 graduate of the U.S. Air Force Academy and was piloting the jet at the time of the incident. King was a 2012 U.S. Naval Academy graduate and was serving as the weapons systems operator, according to the Navy.

“As warfighters they excelled in combat, as naval officers they exemplified the qualities of what our Navy values most dear. I was extremely proud to have led, flown and served with both Brice and Caleb,” Robb said.

“I would ask that during this trying time we all keep the families of our two heroes in our thoughts and prayers,” he added.

The Navy is still investigating what caused the crash. The jet will remain in the water pending their investigations.

VFA-213 is scheduled to complete their training in Key West on March 21 when they will return to Naval Air Station Oceana, the Navy said.

Naval Air Station Oceana is one of the three master jet bases and is home to F/A-18 Hornets and Super Hornets, according to the Navy website.