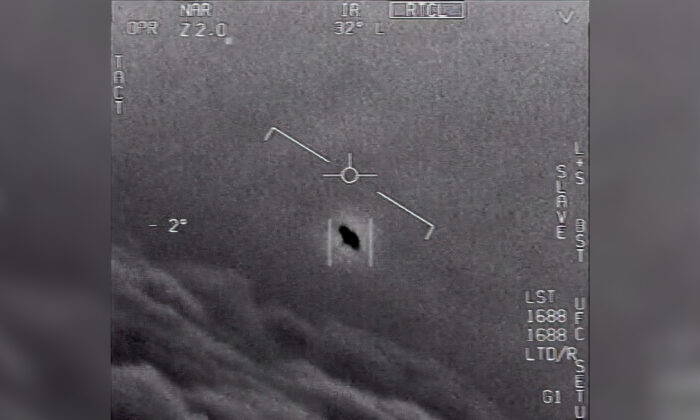 The U.S. Navy told a website that releases formerly classified government documents that all Navy-held videos of unidentified aerial phenomena (UAP)—colloquially referred to as UFOs—are classified and are exempt from disclosure. The maritime service branch also stated that releasing them would “harm national security.”

John Greenewald Jr., the website’s creator, said The Black Vault has tried since April 2020 to release all videos held by the Navy with a UAP designation.

“After nearly two and a half years, the untold number of videos with that UAP designation have been fully denied due to national security concerns,” he wrote on Sept. 8 in announcing the Navy’s denial of the website’s FOIA/Privacy Act (PA) request. “The Black Vault has filed an appeal seeking the release of the videos denied.”

In a letter to Greenewald on Sept. 7 (pdf), the deputy director of the Department of the Navy FOIA/PA Program Office, Gary Cason, confirmed that the Navy has more UFO videos but said all videos with the UAP designation are classified.

Cason said the UAP Task Force—a designated task force within the Office of Naval Intelligence that detects, analyzes, and catalogs UFOs—”have stated that the requested videos contain sensitive information pertaining to [UAP] and are classified and are exempt from disclosure in their entirety.”

He cited exemption 5 U.S.C. § 552 (b)(1) in accordance with Executive Order 13526 and the UAP Security Classification Guide (pdf) as grounds for the UFO videos being exempted from disclosure.

“The release of this information will harm national security as it may provide adversaries valuable information regarding Department of Defense/Navy operations, vulnerabilities, and/or capabilities,” he said. “No portions of the videos can be segregated for release.”

In denying The Black Vault’s request, the letter also states why three Navy UFO videos had previously been authorized to be released, noting that the circumstances were different from the other UFO videos held by the Navy.

“While three UAP videos were released in the past, the facts specific to those three videos are unique in that those videos were initially released via unofficial channels before official release. Those events were discussed extensively in the public domain; in fact, major news outlets conducted specials on these events. Given the amount of information in the public domain regarding these encounters, it was possible to release the files without further damage to national security.”

Cason was referring to a UFO video taken in November 2004 and another two UFO videos taken in January 2015 that were initially released via unofficial channels in 2007 and 2017 before they were officially released thanks to authorization from the Pentagon in April 2020.

UFOs have gained renewed public attention after congressional lawmakers held the first public hearing on UFOs in more than 50 years. At the hearing on May 17, Scott Bray, deputy director of Naval Intelligence, showed lawmakers new footage of UFOs but said he didn’t have an explanation for the objects seen in the videos.

The hearing came after a nine-page report (pdf)—a preliminary assessment by the Office of the Director of National Intelligence released in June 2021—said the UAP Task Force identified 144 UFO sightings from 2004 to 2021 but could only explain one of them.

Bray said at the May hearing that since the release of that preliminary assessment, the UAP Task Force database “has now grown to contain approximately 400 reports.”

One Republican lawmaker, Rep. Tim Burchett (R-Tenn.), alleged at the time that officials were withholding information from Americans about UFOs and weren’t providing “real answers to serious questions.”

The public hearing was followed by a private session of the committee when lawmakers could hear classified information.

When asked at the public hearing about whether the United States has any sensors underwater in the ocean to detect submerged UFOs, Ronald Moultrie, the Pentagon’s top intelligence official, didn’t respond to the question but said the matter would be “more appropriately addressed in [the] closed session.”

Update: This article has been updated with further details.