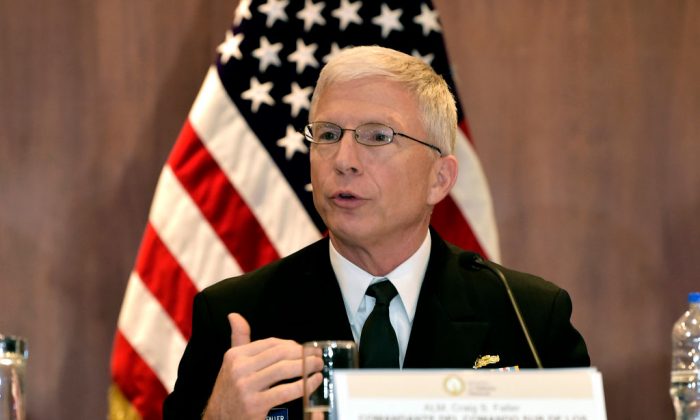 US Admiral of the Southern Command Craig Faller speaks during a press conference in Quito, Ecuador, on April 25, 2019. (Rodrigo Buendia/AFP/Getty Images)
US-China Relations

“China is now inside our own neighborhood seeking to displace the United States as the partner of choice and weaken the commitment of our partners to the rule of law and democracy,” said Faller during his testimony at a hearing by the U.S. Senate Committee on Armed Services on July 9.

He referred to the region as America’s neighborhood, where China has been “quietly accumulating unprecedented levels of influence and leverage,” he said.

China has especially developed its interests on the maritime front. According to Faller, Chinese companies currently have over 50 active port projects in the region. Beijing also has increased its regional port calls by 70 percent over the last five years.

“In the future, China could use its control of deepwater ports in the Western Hemisphere to support global military deployments,” Faller warned.

He used the situation in Panama to make his point. He pointed out that Beijing has invested heavily in the country’s infrastructure, security, and telecommunications, while exerting control over key infrastructure in the Panama Canal.

in May 2017, China’s Landbridge Group was awarded the contract to expand Panama’s largest port, the Colón Container Port, for about $1 billion. The firm began construction in June 2017, according to Chinese state-run media.

In July 2018, China’s state-run China Communication Construction and its subsidiary China Harbor Engineering won the bid for constructing a new bridge over Panama Canal, a contract worth $1.42 billion.

In terms of economic engagement, 19 countries in the region have signed up to China’s “One Belt One Road” (OBOR) initiative, according to Faller. In return, Beijing has pledged at least $150 billion in loans for those countries, he said.

Beijing first announced OBOR in 2013, a foreign policy initiative aimed at building up geopolitical influence through trade networks and billions of dollars worth of investments in countries throughout Asia, Europe, Africa, and Latin America. However, the policy has been criticized for putting developing nations into a debt trap.

Chinese tech companies Huawei and ZTE have also “aggressively penetrated” the region, with commercial and government telecommunication projects in 16 countries, according to Faller.

“If governments in Latin America and the Caribbean continue to gravitate toward using Chinese information systems, our ability and willingness to share information over compromised networks is likely to suffer,” Faller warned.

He also criticized China for financing the Nicolás Maduro regime in Venezuela. The country is currently in a socio-economic crisis marked by food shortages and hyperinflation after more than two decades of socialist policies. The crisis has led to Juan Guaidó, leader of Venezuela’s opposition-controlled National Assembly, to declare himself acting president on Jan. 23.

“China is the single largest creditor of the Maduro regime, saddling the Venezuelan people with more than $60 billion in debt and providing financial lifelines that have helped keep Maduro in power,” Faller said.