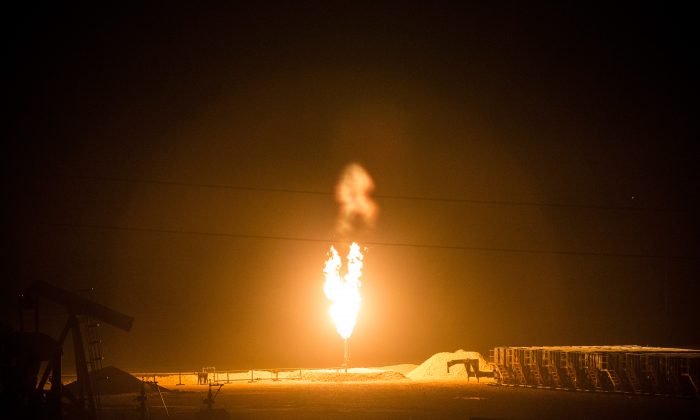 US Natural Gas Prices Highest Since 2008

U.S. natural gas prices have reached levels not seen in a decade and a half, with the U.S. benchmark Henry Hub natural gas price edging close to $8 per million British Thermal Units (BTUs) on Monday afternoon.

The last major Henry Hub price spikes in 2008 and 2006 were due in part to hurricane activity in the Gulf of Mexico. Henry Hub prices in 2008 peaked at $13.32 per million on July 3, according to the Congressional Research Service (pdf), well above the current high.

Natural gas prices fell in 2009 and have remained relatively flat since then, thanks in large part to the rise of hydraulic fracturing, or fracking.

The latest surge in prices comes as Europe seeks to replace Russian natural gas with natural gas from other countries, including the United States.

Meanwhile, China has increased the amount of natural gas it imports from Russia, doubling the amount it bought in February 2022 as compared with February 2021.

The European Union (EU) has already embargoed Russian coal—and on April 6, the president of the European Council, Charles Michel, said he believes “measures on oil and even gas will also be needed sooner or later.”

In 2021, Russia supplied approximately 40 percent of the natural gas that Europe consumed.

Amidst the pressure to lower energy prices, the Biden administration relented on oil and gas drilling on federal lands and waters last week, months after an injunction (pdf) from a federal judge in Louisiana required the administration to halt its pause on issuing new leases.

The last few weeks have also included an unseasonable cold snap in Europe, with effects that included snowfall in Paris.

In its most recent Natural Gas Weekly Update, the Energy Information Administration (EIA) noted that “a sustained period of colder-than-normal temperatures” starting in January 2022 helped to raise domestic demand for natural gas in the lower 48 states.

The contiguous United States ended this winter with the least natural gas in storage since 2019, per an EIA summary released last week.

“Increased heating demand for natural gas this past winter resulted in more withdrawals from U.S. natural gas storage than normal,” the EIA stated.

As recently as 2020, natural gas prices in the United States were “the lowest in decades” when adjusted for inflation, at $2.05 per million BTUs according to the EIA.