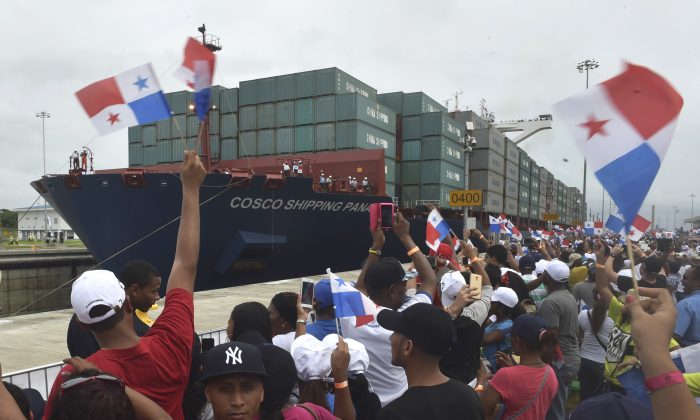 Chinese-chartered merchant ship Cosco Shipping Panama crosses the new Agua Clara Locks during the inauguration of the expansion of the Panama Canal in this undated file photo. China is continuing its push to displace U.S. influence in the region and already has put parts of the Panama Canal under its control. (Rodrigo Arangua/AFP/Getty Images)
Thinking About China

US Must Pivot Toward Latin America to Counter China

Socialism is spreading in Latin America, leaning toward China

Leftists are gobbling up the governments of Latin America as countries drift into China’s orbit.

On June 19, leftist and former guerilla Gustavo Petro won the presidential election in Colombia, calling attention to an increasing leftist shift across the Americas. This parallels increasing engagement with the Chinese Communist Party (CCP), posing a threat to the United States and its interests.

Just weeks before Colombia’s presidential election on May 3, U.S. Secretary of State Antony Blinken addressed the Conference of the Americas and said that it is important for the United States and Latin America to work together because of “Russia’s brutal and unprovoked attack on Ukraine, and the growing threat to free and democratic societies from China and other authoritarian governments.”

However, the actions of the Latin American governments suggest that they do not feel the same way as the United States about Russia and China. In fact, none of the southern neighbors have joined in the sanctions against Russia.

The Summit of the Americas held in Los Angeles, California, from June 6 to 10 excluded the socialist governments of Cuba and Venezuela as well as the authoritarian regime of Nicaragua. The heads of state of Mexico, Brazil, and many Caribbean countries protested these exclusions, weakening the U.S. position with the remaining nations.

China is among the top trading partners of Latin America, in addition to being the No. 1 trading partner of South America. The entire region is becoming extremely dependent on China trade. In 2021, Chile shipped 38.3 percent of its total exports to China. China is Brazil’s top trading partner, accounting for more than double the trade with the United States. Argentina’s trade deficit with China, its No. 2 trading partner, increased 81.5 percent last year.

China is also a leading source of foreign direct investment and lending for the entire region. In 2020, China invested about $17 billion, mainly in South America. Between 2005 and 2020, the state-owned China Development Bank and the Export-Import Bank of China loaned about $137 billion to Latin American governments. Many of these loans were made in exchange for oil. Venezuela has been the largest borrower, having borrowed $62 billion since 2007.

As of December 2021, 20 Latin American countries had signed on to the Belt and Road Initiative (BRI, also known as “One Belt, One Road”). China benefits from natural resources and food, while Latin America receives Chinese cash. Meanwhile, the CCP is increasing its military presence in the region by providing military and police training to local governments, and installing telecommunications and surveillance systems. Latin America and the Caribbean (LAC) region also plays a role in Beijing, drawing away support for Taiwan as most LAC countries now officially recognize China.

China is a voting member of both the Inter-American Development Bank and the Caribbean Development Bank. Within the scope of the BRI, China has made a significant investment in the Panama Canal in addition to 21 major infrastructure projects across the region.

Last year, Beijing and the 33 members of the Community of Latin American and Caribbean States Central American (CELAC) signed the China-CELAC Joint Action Plan for Cooperation (2022–2024). The plan included not only economic and technological cooperation, but also security cooperation. Under the agreement, there is a commitment to continue holding the China-Latin America Superior Defense Forum. Recent security and military cooperation developments are consistent with the CCP’s 2015 Defense Strategy white paper, which stresses the importance of establishing overseas defense cooperation.

The United States is naturally concerned about the security threat China poses in the region. Still, it is difficult to cajole Latin America away from CCP money with words alone. The Biden administration is also putting off many of the LAC states by refusing to recognize their individuality.

LAC comprises more than 30 nations, spanning at least seven official languages, each with unique problems and desires. The White House tends to lump them together and say that they are plagued by illegal immigration, transnational crime, weak institutions, flawed democracy, corruption, persistent interference from Russia, and the increasing influence of China. This blanket U.S. policy approach is insulting and alienating because countries such as Brazil and Peru are as different as Germany and France.

Suppose the Biden administration wishes to enlist the cooperation of the LAC nations in countering the CCP in the region. In that case, the White House will need to extend the same courtesy and diplomacy to these nations as it does to European and Asian countries. Washington must engage with them as unique individuals and offer realistic alternatives to the CCP. If not, then every nation from Argentina to the U.S. southern border will fall into the grasp of the CCP.