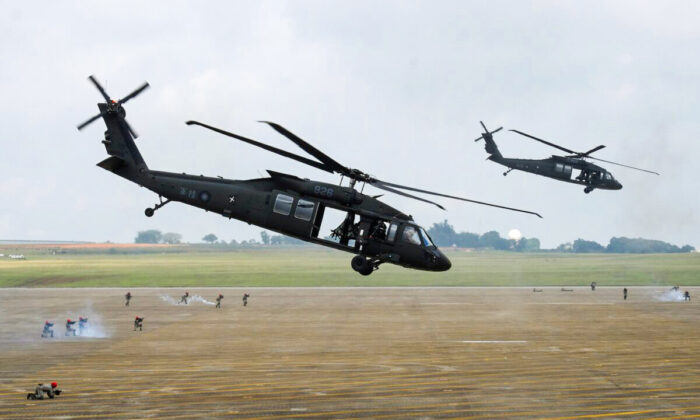 US Must ‘Expand the Battlefield’ to Win a War Against China Over Taiwan: Experts

The United States can win a war against China over Taiwan, analysts say, but it must take steps to expand its efforts in the different domains of economics, warfare, and diplomacy against the Chinese regime.

Describing a wargaming exercise conducted in October 2020, including a simulated conflict with the Chinese regime over Taiwan, then-Vice Chairman of the Joint Chiefs Gen. John Hyten said in July, “Without overstating the issue, it failed miserably.” As a result, Hyten called upon the Pentagon to overhaul its warfighting strategy to gain the edge in battle by 2030.

Grant Newsham, a retired U.S. Marine Colonel who was the first Marine Liaison Officer to the Japan Ground Self-Defense Force, told The Epoch Times that “the more people hear about losing a fight with China over Taiwan, it creates a sense of defeatism, a sense that there’s nothing we can do.” He said that “America must expand the battlefield” to find success against the Chinese regime.

James Fanell, a former director of intelligence and information operations for the U.S. Pacific Fleet, concurred. He said that “the U.S. would have difficulties operating inside the first island chain, so the battlespace needs to be expanded not just in the military arena, but also the economic and diplomatic arena.”

Newsham and Fanell said lines of trade and commerce can be affected, if not stopped. And this would have a significant impact on the Chinese regime’s ability to exert itself over Taiwan. “Because China is dependent on overseas assets,” Newsham said. “It is very vulnerable.”

Some of China’s top imports include integrated circuits, crude petroleum and petroleum gases, and soybeans. China is the second-largest trade destination in the world with total imports averaging approximately $1.61 trillion.

“The Chinese military, for all its rapid growth and power, is not able to defend China’s overseas interests, or its overseas lines of communication,” Newsham said. The country is “simply too dependent” on the Association of Southeast Asian Nations (ASEAN) and the European Union, its major import partners.

Fanell said, “By limiting access to overseas assets including technology, energy, and even food, it would put the Chinese Communist Party (CCP) at great risk.”

Newsham said that while it is seldom mentioned, it is also worth noting that “the renminbi [RMB], is not a convertible form of currency.” It’s merely the official currency of the People’s Republic of China, but “China can barely buy anything overseas with it, nor does anybody really want the currency,” he said.

According to Newsham, the United States could impose financial sanctions on China to take advantage of these “huge vulnerabilities” by stopping the flow of goods and keeping the use of the “people’s currency” internalized.

Fanell agreed, saying that “crippling economic sanctions would get China’s attention very quickly.” Additionally, he said the United States Navy could “interdict to stop or divert ships” from delivering many of its imported resources.

It is then that the Chinese regime would become “very vulnerable, not only militarily, but also financially and economically.” By expanding the battlefield in this manner, Newsham said “China would be given a very bad hand to play and be placed in a very weak position.”

Admittedly, if a fight with the Chinese regime was limited to the Taiwan Strait, Newsham said, “America would have a hard time, [but] by expanding the battlefield, odds would change immensely in favor of the United States.”

Decades of “isolation” from large-scale joint exercises with its military allies must also come to an end, according to Newsham. “Taiwan’s military has not developed the way it should have over the last 40 years due to a lack of exposure to other militaries,” he explained.

“Consider the problems that the Taiwanese could face in large-scale operations with other militaries, having never trained and conducted exercises together.”

Newsham said he suspects such training with Taiwan has been neglected for so long for fear of upsetting the Chinese regime. “That sends a message to Taiwan: we love you and we’ll support you, but we’re afraid to be seen in public with you,” he said. “It is past time for Taiwan’s allies to break the isolation and engage in multilateral training and exercise with Taiwan.”

If the isolation is not broken, he said the chances of allowing Taiwan to develop so that it could defend itself are severely jeopardized.

What’s more, Fanell said the CCP has heard from American military leaders that the United States won’t “strike the mainland.” According to him, many fear that an attack on China’s mainland would immediately escalate to a nuclear war. But Fanell doesn’t agree.

Other countries must use diplomatic means to impact the Chinese regime’s global standing, Fanell said. One possibility includes making use of the Quadrilateral Security Dialogue (Quad), an informal partnership between Australia, India, Japan, and the United States.

Fanell suggested that the U.S. State Department should encourage the Quad’s foreign ministers to issue a joint statement, alongside any other nation in the Indo-Pacific, that would condemn the Chinese regime for what it has done against Hong Kong and is doing against Taiwan. “The point is, if the Chinese regime is going to be confronted, all levers of national power will have to be used.”

In terms of diplomacy, Fanell said “the world needs to be much more aggressive” in confronting the Chinese regime for what it’s doing “against freedom and liberty, and against international norms and standards.” He said the Chinese regime is “the odd nation out” and “the exception to the rule,” adding that “it’s not about America versus China, but it’s about China versus the world.”

According to Fanell, this must be exposed in a way that “further diminishes the standing and posture” of the Chinese regime on a global scale. And part of the problem can be attributed to the United States, he added.

“Big corporations and investment firms need to stop pouring billions of dollars into China, [because] some portion of every dollar that’s spent there is going toward building the PLA, [People’s Liberation Army] which in turn, uses it to prepare for war against the United States.”