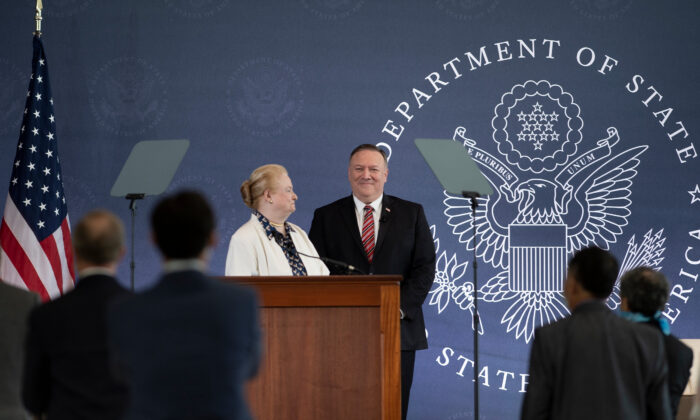 Commission chair Mary Ann Glendon looks at US Secretary of State Mike Pompeo before he speaks at the National Constitution Center about the Commission on Unalienable Rights in Philadelphia on July 16, 2020. (Brendan Smialowski/AFP via Getty Images)
Trump Administration

The United States should vigorously promote human rights around the world as part of its foreign policy, the State Department Commission on Unalienable Rights concluded in a draft report released on July 16.

Secretary of State Mike Pompeo tasked the commission in July 2019 to assess and advise the State Department on how America’s unique rights tradition can inform its foreign policy work. The panel found that the human rights advances of the past century are in crisis and recommended that the United States must leverage its foreign policy to advance the cause.

“Our fellow Americans are not of one mind on many issues where there are conflicting interpretations of human rights claims—abortion, affirmative action, and capital punishment, to name a few,” the commission’s draft report states. “But with hundreds of millions of men and women around the world suffering extreme forms of deprivation under harsh authoritarian regimes, we are of one mind on the urgent need for the United States to vigorously champion human rights in its foreign policy.”

Pompeo, speaking at a July 16 event marking the release of the report, noted that while he didn’t task the commission with making recommendations, they couldn’t have arrived at a better time. He said that while “the great and noble human rights project of the 20th century is in crisis,” the institutions entrusted with the task of defending and promoting the cause of human rights are failing.

He suggested that many human rights advocacy groups have sacrificed principles for politics.

“We see multilateral human rights bodies failing us,” Pompeo said. “The United Nations Human Rights Council does the bidding of dictators and averts its gaze from the worst human rights abuses of our times.”

Pompeo placed particular emphasis on human rights violations by the Chinese Communist Party (CCP) and specifically called out Nicaragua, Venezuela, Zimbabwe, Iran, Russia, Burma, and North Korea. He also laid blame on the “incurious media,” which “rarely examines any of these failings.” He singled out The New York Times, which declined to publish an op-ed on the commission’s report.

In the weeks preceding the commission’s report, the United States took significant steps to counter human rights abuses in China. The State Department issued a notice that warned U.S. companies about doing business with Xinjiang Province, where slave labor is rampant. The department also issued visa restrictions focused on CCP officials who have participated in Beijing’s ongoing crackdown on Hong Kong’s citizens and undermining of its autonomy.

The commission concluded, and Pompeo concurred, that the United States must set an example in its domestic affairs in order to exercise leverage in foreign policy. The recent protests and riots sparked by the death of George Floyd prompted criticism from authoritarian regimes, who claim that the United States can’t pressure others to uphold human rights while allegedly failing on the same front at home.

The commission and Pompeo bluntly reject the comparison.

“Just as the Soviet Union did in 1948, China, Iran, and Russia have been quick to charge that our country’s domestic failures destroy its standing to defend universal human rights today,” the report states.

“There can be no moral equivalence, however, between rights-respecting countries that fall short in progress toward their ideals, and countries that regularly and massively trample on their citizens’ human rights.”