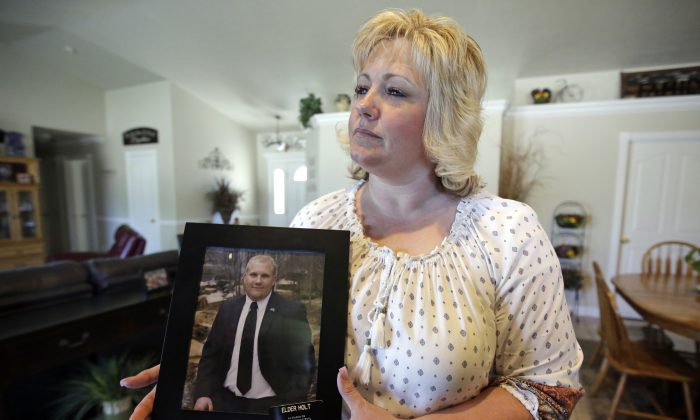 Laurie Holt holds a photograph of her son Joshua Holt at her home in Riverton, Utah on Jully 13, 2016. (AP Photo/Rick Bowmer, File)
US News

US Mother Who Helped Free Son From Venezuelan Jail Praised

SALT LAKE CITY—The family and friends of a Utah woman who spent nearly two years pushing to get her son freed from a Venezuelan jail was remembered for her fearlessness and determination at her funeral Feb. 16.

The 50-year-old Laurie Holt died unexpectedly Feb. 10 at her Riverton, Utah, home, less than one year after her son Josh Holt returned to the U.S. after being imprisoned for nearly two years on weapons charges that the Holts and U.S. politicians said were invented. Laurie Holt’s husband says she died peacefully but the family has not said what caused her death.

Josh Holt said his family has received letters of support since his mother’s death, including many from people who never met her but were inspired by her relentless efforts to bring her son and his new wife back to the United States, the Tribune reported.

“That is my mother,” Josh Holt said. “She is my hero. She taught us so much.”

Laurie Holt, originally from Pocatello, Idaho, is survived by her husband and four adult children.

Her family noted in her obituary that she always found laughter in small things, even in life’s “darkest storms,” and found a way to juggle work, family, and outside functions.

“We have lost our biggest hero, but heaven has gained a mighty warrior,” the obituary said.

Her son Josh Holt returned to the United States with his Venezuelan wife, Thamara Caleno, in May 2018 after he was imprisoned in June 2016.

Holt went to the South American country in June 2016 to marry Caleno, who he met online while looking for a Spanish-speaking Mormon to help him improve his Spanish.

He had planned to spend several months in Caracas with his new wife and her two daughters to secure their visas so they could move with him to the United States.

Instead, the couple was arrested and accused of stockpiling weapons. Venezuelan authorities suggested the case was linked to unspecified U.S. attempts to undermine President Nicolas Maduro’s rule amid deep economic and political turbulence.

Laurie Holt vehemently denied the accusations on her son’s behalf and raised awareness about her son’s incarceration by hosting rallies and fundraisers and doing media interviews.

Their release came after secret backchannel talks between an aide to Tennessee Sen. Bob Corker, chairman of the Senate Foreign Relations Committee, and close allies of Maduro.

President Donald Trump hosted the Holts at the White House to commemorate the release.