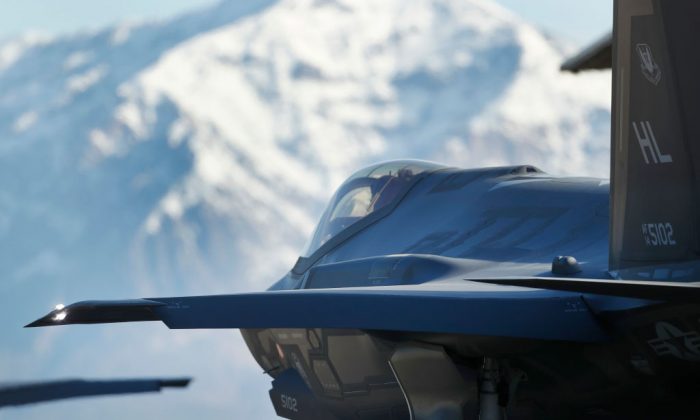 An F-35 fighter jet taxies out for a training mission at Hill Air Force Base on March 15, 2017 in Ogden, Utah. (George Frey/Getty Images)
US News

The Enhanced Paveway II bomb uses laser and GPS technology to target moving objects from a moving aircraft with precision, Fox News reported. They will increase the capabilities of the F-35, which was designed to replace multiple types of jets as a kind of all-purpose fighter, according to the F-35 Lightning II website.

The F-35’s hallmark is its unprecedented stealth. It is extremely hard to for radar systems to detect F-35s. The jet comes in three different configurations meant to satisfy the needs of different branches of the military and different combat situations, according to the F-35 website.

The F-35A takes off and lands like a conventional plane, on a runway, most suitable for Air Force usage. The F-35B can takeoff from shorter distances and land vertically because of an engine that swivels, allowing the jet to hover. The Marine Corps prefers such a jet. The F-35C’s design is most favored by the U.S. Navy, although the Marines also plan to purchase some. This variant is designed for the unique takeoff and landing scenarios of an aircraft carrier.

The highly advanced computers on the F-35 are now able to detect and track multiple targets, though designers in the early years of the program originally envisioned pilots using cluster bombs, The National Interest reported. But the United States and militaries across the world are relying less on cluster bombs since the Convention on Cluster Munitions (CCM) was adopted in 2008.

Cluster munitions are seen as a threat to civilians both during and after conflict since their munitions lack precision and and often remain unexploded, putting civilians at risk, according to the Cluster Munition Coalition. The Paveway II allows much more precise targeting even before the F-35’s more advanced moving target systems are implemented.

The F-35’s computer systems will get an upgrade to accommodate a bomb currently in development for hitting moving targets, the Small Diameter Bomb II, according to Fox News. Until that bomb is fully developed, targeting moving objects will be handled by the GBU-49 Enhanced Paveway II, which, according to the Air Force, “will enable the F-35A to strike moving targets when integrated with the aircraft’s Software Block 3F until Laser Joint Direct Attack Munitions and Small Diameter Bomb II munitions are integrated in later software releases.”

These could potentially be used in Asia. F-35s are currently deployed at the U.S. Air Force’s Kadena Air Force Base in Japan. Fox News reported that the Enhanced Paveway II would be useful in the event of military action against North Korea.