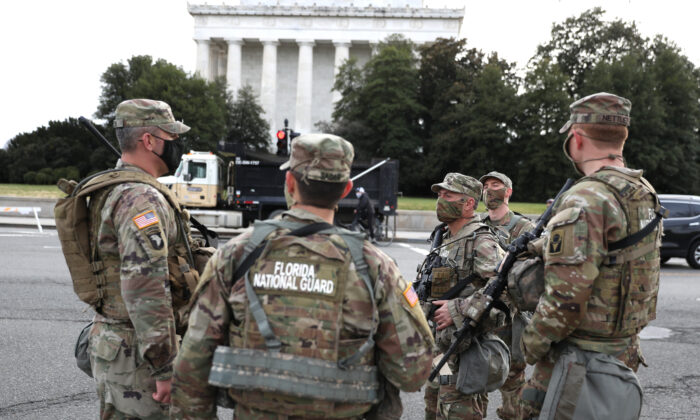 Military members were ordered in 2021 to get a COVID-19 vaccine. Deadlines for all the branches arrived before the end of the year. National Guard personnel and reservists were allowed to wait until mid-2022, but those who aren’t vaccinated and haven’t received an exemption were cut off from their paychecks in July and threatened with possible separation if they don’t get vaccinated.

Defense Secretary Lloyd Austin and other military leaders have said the mandate was imposed to ensure military readiness. The mandate “is necessary to protect the Force and defend the American people,” Austin said in a memorandum to senior leaders in August 2021.

But Maj. Gen. James Eifert, commanding general of the Florida National Guard, said in a Wall Street Journal op-ed that the requirements aren’t protecting the military.

“Sound policy must be more beneficial than detrimental; the military’s Covid mandate decidedly isn’t. The benefits of vaccination are limited. Existing vaccines don’t prevent transmission of the dominant variants. And the virus has become less capable of rendering severe clinical outcomes, while effective treatments are now available for those who do get sick,” he wrote.

Eifert said he backed mandates when U.S. authorities initially said the vaccines were highly effective against infection and severe illness, “but the circumstances have once changed,” with effectiveness being dramatically lower than once thought, and a number of adverse events being detected after the clinical trials.

“As our knowledge of risk changes, shouldn’t our policy change with it?” Eifert asked.

Even before the vaccines were available, military readiness was only hindered by quarantine requirements and lockdowns, not COVID-19, according to Eifert. He noted that only 95 U.S. military deaths have been attributed to COVID-19, a mortality rate of 0.004 percent, based on the number of cases recorded among troops.

If the current policy isn’t changed, then the Florida National Guard faces the loss of about 1,000 personnel, or 8.3 percent of its force.

“Our world is only becoming more dangerous. I’m hopeful that an open-minded self-assessment leads to a solution that addresses this most serious threat to force readiness—before it’s too late,” Eifert said.

The Army and National Guard declined to comment on Eifert’s comments. The Pentagon didn’t respond to a request for comment.

Eifert was appointed by Florida Gov. Ron DeSantis, a Republican.

None have been separated.

“We’re going to give every soldier every opportunity to get vaccinated and continue their military career. We’re not giving up on anybody until the separation paperwork is signed and completed” Army Lt. Gen. Jon Jensen, director of the Army National Guard, told The Epoch Times in an emailed statement.

Some Marine Corps and Coast Guard reserves have also refused to comply with the vaccination order.