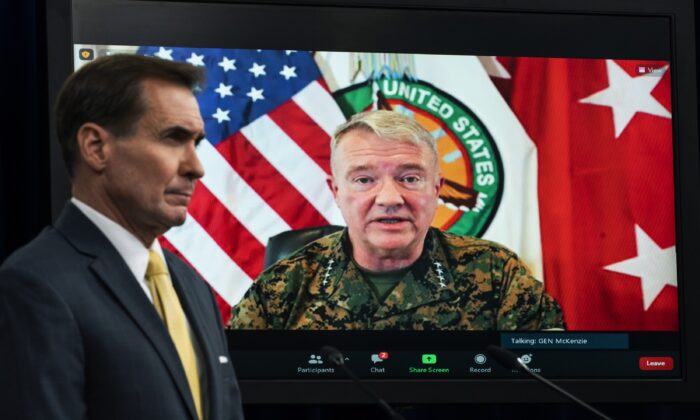 US Military: Up to 10 Civilians Killed in Airstrike in Kabul

As many as 10 civilians were killed in a U.S. airstrike in Kabul, Afghanistan, last month, the U.S. military said Friday.

Additionally, the strike does not appear to have killed anybody with or linked to the terrorist group ISIS-K, U.S. Gen. Frank McKenzie, commander of the U.S. Central Command, told reporters during a press conference.

The revelations were informed by an investigation directed by McKenzie after the Aug. 29 strike, which was carried out in retaliation for a suicide bombing at the airport in Kabul that killed 13 U.S. service members.

U.S. military leaders had repeatedly portrayed the strike as a successful attack, even as family members of the deceased insisted there was no connection between them and the ISIS offshoot.

“At this point, we think that the procedures were correctly followed and it was a righteous strike,” Gen. Mark Milley, the chairman of the Joint Chiefs of Staff, said in Washington on Sept. 1.

That stance was shifted on Friday, when McKenzie revealed the results of the probe, which found that as many as 10 civilians, including up to seven children, “were tragically killed in that strike.”

“Moreover, we now assess that it is unlikely that the vehicle and those who died were associated with ISIS-K or were a direct threat to U.S. forces,” he added. “I offer my profound condolences to the family and friends of those who were killed. This strike was taken in the earnest belief that it would prevent an imminent threat to our forces and the evacuees at the airport. But it was a mistake, and I offer my sincere apology. As the combatant commander, I am fully responsible for the strike and this tragic outcome.”

The stunning admission drew criticism from members of Congress, including Rep. Andy Biggs (R-Ariz.), who highlighted how President Joe Biden was headed to Delaware for a weekend vacation as McKenzie delivered his remarks.

“Biden’s Pentagon admits that they killed 10 innocent people in Kabul, not the targeted ISIS-K terrorists. Meanwhile, Biden is taking a vacation on the beach, shirking off responsibility, holding no one accountable. Biden is a disgrace,” Biggs wrote on Twitter.

“It’s an unbelievable tragedy that 10 civilians including an aid worker & 7 children were killed by a U.S. drone strike in Afghanistan. My heart is with the families. We need more transparency and oversight to ensure this does not happen again,” Rep. Ro Khanna (D-Calif.) added.

Defense Secretary Lloyd Austin said in a written statement that he was briefed on the findings of the probe on Friday morning.

“On behalf of the men and women of the Department of Defense, I offer my deepest condolences to surviving family members of those who were killed, including Mr. Ahmadi, and to the staff of Nutrition and Education International, Mr. Ahmadi’s employer,” he said, referring to Emal Ahmady, who said he translated for an American company for three years starting in 2011.

“We now know that there was no connection between Mr. Ahmadi and ISIS-Khorasan, that his activities on that day were completely harmless and not at all related to the imminent threat we believed we faced, and that Mr. Ahmadi was just as innocent a victim as were the others tragically killed. We apologize, and we will endeavor to learn from this horrible mistake.”

The strike was rushed because U.S. military officials believed there was an imminent threat to American service members, who at the time were holding Kabul’s airport to facilitate evacuations of U.S. citizens and others out of Afghanistan, according to McKenzie. The strike was based on intelligence conveying a threat from a white Toyota Corolla, but the investigation found the military struck a car that posed no threat.

“We struck under the theory of reasonable certainty. Probably our strikes in Afghanistan going forward will be under a higher standard,” McKenzie said.

Ahmady told news outlets shortly after the strike that five children and five adults among his relatives were killed in the strike.

He said he had been seeking a Special Immigrant Visa, given to those who helped U.S. troops during the decades-long war in Afghanistan but that he is no longer seeking to emigrate to the United States.

“My message for the USA and other countries is that they should try and avoid making mistakes in Afghanistan. Do not try to target civilian people. Because Afghan people like members of their family a lot. And when they lose a father or brother or son [it’s] very difficult for them,” Ahmady, also spelled Ahmadi in some reports, told Euro News.

Photographs and video footage from the scene showed the white Toyota pulverized and a red SUV next to it charred from the explosion.

U.S. Central Command initially said that the strike was followed by other explosions, claiming that “indicat[ed] a large amount of explosive material inside that may have caused additional casualties.”

McKenzie said Friday that it took a while to uncover what had actually happened. He said the investigative report is a classified document that won’t be released at this time.