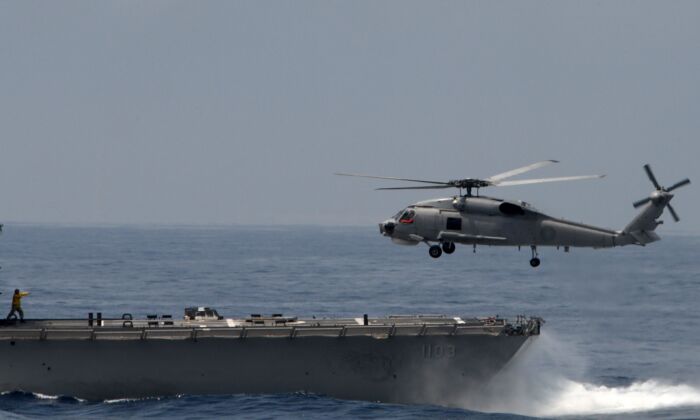 A U.S.-made S70C helicopter is guided by a navy soldier during take off from a frigate at the sea near the Suao navy harbour in Yilan, eastern Taiwan on April 13, 2018. (Sam Yeh/AFP via Getty Images)
Thinking About China

If the United States and China go to war, Taiwan could likely be the trigger.

A recent report alleged that roughly 24 members of U.S. special operations and support troops have been conducting training for the Taiwanese military over the past year.

President Joe Biden claims that he and Chinese leader Xi Jinping spoke about the Taiwan situation, and have both agreed to abide by “the agreement.” While it is unclear which agreement Biden was referring to, it is presumed that he meant the “one-China” policy. Under this policy, the United States recognizes Taiwan and China as a single entity, but has no official opinion on Taiwan’s sovereignty or who rules whom.

The Chinese Communist Party (CCP) has called for the United States to cut off military ties with Taiwan. CCP officials said that the Washington should recognize the sensitivity of the issue and that Beijing would take every action to protect China’s borders. As the CCP claims ownership of Taiwan, it interprets any support for the independence of Taiwan as an infringement on China’s sovereignty. By extrapolation, the CCP believes that if China owns Taiwan, it would also control the sea and airspace around the island nation.

China’s ambassador to the Association of Southeast Asian Nations (ASEAN), Deng Xijun, tweeted that by dispatching so many warplanes near Taiwan, the CCP “sent [a] strong warning to the Taiwan secessionists and their foreign supporters.” The Biden administration responded by confirming that the U.S. commitment to Taiwan remained “rock solid.”

So far, the current administration has not only maintained Trump-era policies and U.S. engagement with Taiwan, but even sent an unofficial delegation to Taipei, comprised of a former senator and two former U.S. deputy secretaries of state.

In a move that many believe is a prelude to a Taiwan invasion, the CCP has been expanding China’s military at a rapid pace. According to a 2020 defense report by the the U.S. Navy, U.S. Marines, and U.S. Coast Guard, China had more than tripled the size of its navy over the past 20 years and that it now has more ships, but not necessarily more firepower than the United States.

Taiwanese Defense Minister Chiu Kuo-cheng predicted that by 2025, the PLA would be strong enough to invade Taiwan.

Even while suffering an economic slowdown caused by the pandemic response, China increased its defense spending by 6.8 percent, raising their 2020 defense budget to $210 billion. The PLA already maintains 3 million troops, while it is pouring more money into aircraft carriers, nuclear-powered submarines, and stealth fighters.

Premier Li Keqiang, addressing a meeting of the National People’s Congress (China’s rubber-stamp legislature), said that the CCP would “thoroughly implement Xi Jinping’s thinking on strengthening the armed forces and the military strategy … boost military training and preparedness … enhance the military’s strategic capacity to protect the sovereignty, security, and development interests of our country.”

In the face of an increasing threat from the CCP, U.S. Assistant Secretary of Defense for Special Operations Christopher Maier told the Senate Armed Services Committee during his confirmation hearing that the United States should consider sending troops to Taiwan to train their defense forces.

Matt Pottinger, former deputy national security adviser under the Trump administration and a current visiting fellow at the Hoover Institution, suggested that Taiwan should invest in the most lethal but least expensive weapons that could complicate an invasion by the PLA. These include anti-ship missiles, smart sea mines, and well-trained reserve and auxiliary forces.

The U.S. Strategic Framework for the Indo-Pacific was declassified by the Trump administration. A section on Taiwan warns that the Chinese regime would become more aggressive as it pushes harder for annexation of Taiwan. The document recommends the United States to help Taiwan improve defense strategy and capabilities, including stationing a “combat-credible” U.S. military force in Taiwan to prevent Chinese domination.

Part of the U.S. commitment is to provide Taiwan with the means to defend its borders. In 2020 alone, the United States sold $5 billion worth of weapons to the island nation. Beijing opposes U.S. troops training the Taiwanese military and has also lodged complaints each time Washington sold weapons to Taiwan. Additionally, the CCP has condemned the existences of both the Quad partnership and the new AUKUS pact—U.S.-led multilateral strategies to contain China in the Indo-Pacific. More recently, Beijing criticized Australia’s purchase of U.S. nuclear submarines. It seems the Chinese regime sees itself as the only power in the region that should be allowed to improve its military capabilities.