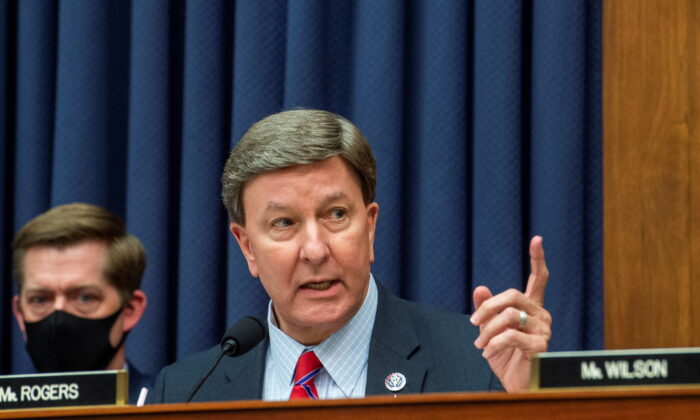 “It really doesn’t matter what the defense strategy is if you don’t have robust spending,” Rep. Mike Rogers (R-Ala.) said.

“The fact is that we are in the early stages of a transformation of our military modernization process that is going to be at least a decade long, and a very expensive endeavor. At the same time, we’re coming out of two decades of war, where we have worn out everything we’ve got.”

“The budget just doesn’t deal with that reality,” Rogers added.

He made the comments during a talk sponsored by the Hudson Institute, a Washington-based think tank. He said that the U.S. military couldn’t hope to both expand and modernize, while simultaneously maintaining legacy platforms on the current budget.

Specifically, he’s concerned that the proposed defense budget for 2023 offers only about 1 percent of real growth after inflation. Inflation currently tops 8 percent and could go higher still. He said that a realistic budget would need to include at least 5 percent over real inflation.

Rogers added that he thinks military leadership is caught in a cycle of trying to make their strategic outlook fit a budget, rather than requesting money based on the reality of the global situation.

“That’s the thing that we have to keep reminding them, stop trying to make the threats fit the budget number that the president gave you,” Rogers said. “You worry about the threats and tell us how much it’s going to cost and let us worry about it.”

“The fact is, it’s our responsibility as Congress to provide them with the resources they need to meet today’s threats while we prepare for the future.”

Increasing spending, Rogers said, is vital in the aftermath of the United States’ failure to deter Russia from invading Ukraine, as the communist Chinese regime would certainly be studying the situation to inform its own plans for a possible invasion of Taiwan.

“I hate that China saw our president being passive and reactive rather than leading and being assertive in trying to deter aggression. That was not good,” Rogers said.

“We can do a lot to make Taiwan a much more difficult target for aggression if we just lead.”

To that end, he said that there was some silver lining in the unified Western response to Russian aggression: Namely, that Chinese leadership would be much more concerned about its prestige than Russia has been.

“The thing I’m pleased about is the way the world turned against Putin,” Rogers said. “Putin doesn’t care by the way. He doesn’t care who doesn’t like him. [But] China cares about their standing in the world.

“That is a problem for China because they have global aspirations, and they do care what the world thinks about them. So I think that is going to have a chilling effect on their naked aggression toward Taiwan.”

With that in mind, Rogers said it’s imperative for the United States to arm Taiwan effectively ahead of any invasion, as opposed to being caught flat-footed and attempting to ship weapons systems after the start of hostilities. That too, he pointed out, requires more spending.

“This is not one that we can just sit by and let happen. We cannot let China take Taiwan. For a host of reasons, we will end up involved in that.”