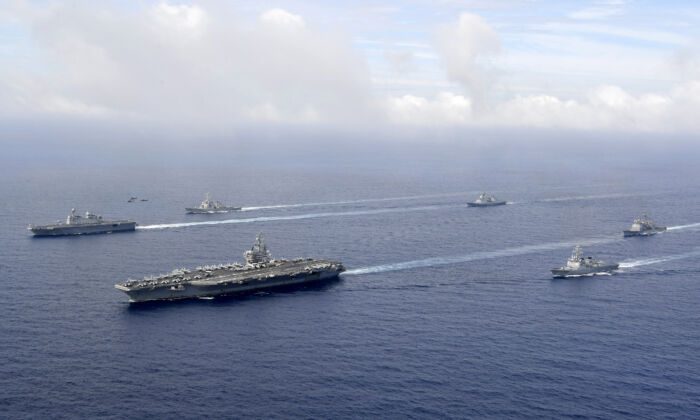 The Pentagon sent a U.S. aircraft carrier group to the South China Sea amid speculation that House Speaker Nancy Pelosi (D-Calif.) would visit Taiwan, according to a Navy spokesperson.

“I can confirm USS Ronald Reagan and her strike group are now underway, operating in the South China Sea following a successful port visit to Singapore,” Navy spokesman Lt. Mark Langford told media outlets Thursday. “As a matter of policy, we do not discuss future ship movements; however, I will add that Reagan is continuing normal, scheduled operations as part of her routine patrol in support of a free and open Indo-Pacific.”

The carrier strike group made its way to the South China Sea after departing Changi Naval Base in Singapore on Tuesday, the U.S. 7th Fleet also said in a statement to Bloomberg News this week.

Any foreign travel by a senior U.S. leader requires additional security. But officials said this week that a visit to Taiwan by Pelosi—she would be the highest-ranking U.S. elected official to visit Taiwan since 1997—would go beyond the usual safety precautions for trips to less risky destinations.

Pelosi, who visited Ukraine in May, has not publicly confirmed any new plans for a trip to Taiwan. She was going to go in April, but she postponed the trip after testing positive for COVID-19.

On Wednesday, Joint Chiefs of Staff Chairman Mark Milley told reporters that “if there’s a decision made that Speaker Pelosi or anyone else is going to travel and they asked for military support, we will do what is necessary to ensure a safe conduct of their visit. And I’ll just leave it at that.”

But President Joe Biden last week raised concerns about the visit and told reporters that the military believes her trip is “not a good idea right now.” He didn’t elaborate.

The reports of the carrier group being mobilized in the South China Sea come ahead of a scheduled call between Biden and Chinese leader Xi Jinping to discuss Taiwan, which the Chinese Communist Party (CCP) has long claimed belongs to it. Xi has vowed to bring Taiwan under the CCP’s control, although the island country has been self-governed since 1949.

“This is a call that has been scheduled for a long time and there’s already a pretty robust agenda of things for these two leaders to talk about,” Pentagon spokesman John Kirby said Wednesday. “Everything from the tensions over Taiwan to the war in Ukraine, as well as how we better manage competition between our two nations, certainly in the economic sphere.”