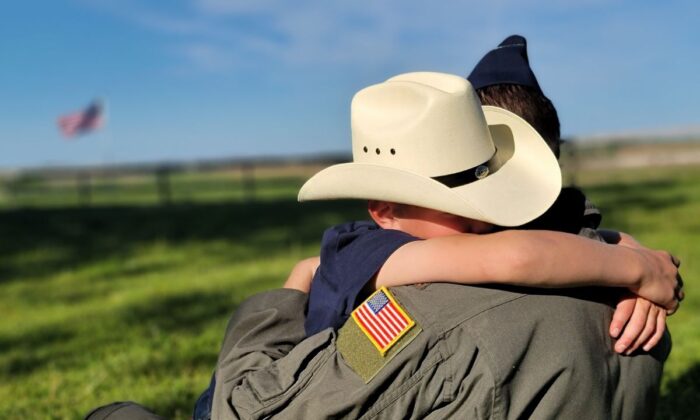 An Air Force father returns home from work and receives a hug from his son in an Iowa field. (Courtesy Airmen for Religious Freedom)
Policies & Impacts

Military service demands sacrifice. Members must accept time away from family, discomfort during training and active duty, and they must have a willingness to give their all; lay down their life.

But since 2021, military members who refused to take the COVID-19 shot for religious reasons have been told that they must also sacrifice either their faith or their career, discharge reputation, and any future benefits they may have been banking on.

In the waning days of the pandemic, all branches of the U.S. military are still denying religious exemptions that would allow those who object to the shots for religious reasons to continue to serve. More than 24,000 service members have filed a Religious Accommodation Request and have been denied, according to the Liberty Counsel, which is pushing forward with a class certification for a lawsuit that will include members of all six military branches, including the Space Force.

There are at least nine suits across the nation attempting to help the unvaccinated faithful keep their jobs.

“It is abusive. It is inhumane. It is an intentional purge of people of faith from the military by the Biden administration,” Mat Staver, attorney and chairman of the Liberty Counsel, told The Epoch Times. He notes numerous ways the military has relaxed its COVID mitigation, such as housing Marines at the Parris Island barracks who are COVID negative and COVID positive together. “We know across the board that you’re having various platoons that are being dismantled and are not being rebuilt because they don’t have people to staff. We know that recruitment is down. People are not coming into the military because the morale is at an all-time low. So that’s why I say in light of all of this, why are [there] still mandates?”

In response to the Jan. 6, 2021 rally at the U.S. Capitol that has been characterized as an insurrection of extremists, Defense Secretary Lloyd Austin, in February 2021, directed military leaders to address extremism within the troops. Austin’s office did not respond to a request for comment for this story.

“He wanted to purge the military. He was referring to people like those coming out of Jan. 6, but I think his definition is broader than that,” Staver said. He believes people of faith are also being targeted.

It has caused some military members to reevaluate who the enemy is.

Staver says those seeking religious exemption from the shot are facing immense pressure.

One client, a one-star brigadier general who has served more than 20 years, wasn’t ready to retire, but she could. She doesn’t want the shot for religious reasons. Instead of letting her retire with honor now, she must first take the shot. No shot would mean dishonorable discharge and a loss of benefits.

“We have people that are deployed in Korea or Japan,” Staver said. “We have many of these stories. One was sent to Korea for a year on a company deployment. He was supposed to come home in December of 2021. But because he asked for a religious exemption, they’ve frozen him in Korea. They won’t let him come back to see his wife and his 10-month-old son.” He’s never seen his son who was born while he served far from home. “His wife is very distraught. He tells us there’s no end in sight for him to be able to come home. They’re saying, ‘You’re not going to be able to leave and go home until you take the shot.’ And they’re doing that all over the world. I can tell you story after story after story.”

Staver knows of unvaccinated people who are kicked out of the barracks. They are not getting reimbursed for housing. Some are living in their cars.

And he tells of the military moving people’s belongings to the opposite coast as they were being redeployed to a different part of the country. Their furniture and other belongings end up frozen in the wrong place.

“This is the kind of pressure that they’re applying,” Staver said. “What the chaplains continue to say is they’ve never seen this kind of abuse and mistreatment of service members.”

He says morale is at an all-time low, and many who have spent their life serving have told him they would no longer recommend a military career to young people.

“At a time when we need the military at its strongest, Biden has weakened it. People who have been around for 18, 20, 25 years—you can’t replace those people very easily. Some of them are just irreplaceable. And they’re willing to kick them out.”

While the decision to decline the shot is personal, those who are asking for exemptions from the shot want Americans to understand their fight is a matter of liberty for all.

“These guys are metaphorically in a trench fighting to preserve the freedoms of being able to live out our convictions,” Megan, an Air Force wife at Offutt Air Force Base near Omaha, Nebraska, told The Epoch Times. Her last name is being withheld as they are trying to keep her husband’s job. “These guys want to live out their convictions and still be able to do their job. Why is it a mutually exclusive thing? You can no longer serve God and your country? How did this happen? How did we get here?”