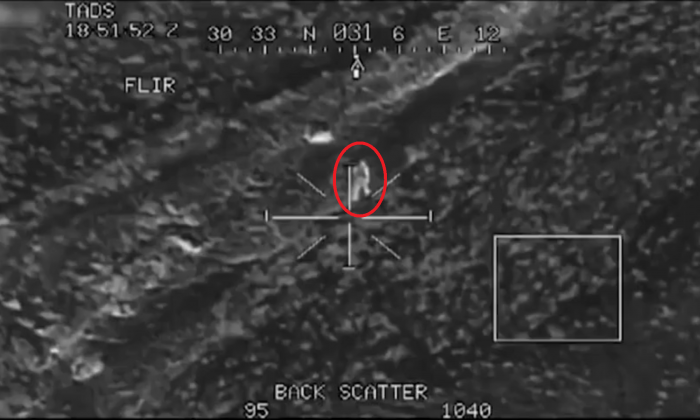 An alleged Taliban fighter moments before being hit by a missile launched by an AH-64 Apache helicopter. (U.S. Army)
Middle East

Footage has emerged online of a military helicopter using a missile to attack a single man.

The 30-second video shows an infrared view of a man walking through rough terrain. Seconds later he disintegrates in a missile explosion.

The man was a Taliban terrorist and the footage was captured by a camera mounted on an AH-64 Apache attack helicopter, according to Funker530, a website and a YouTube channel run by U.S. military veterans who regularly post clips of combat footage.

Funker530 hypothesized the helicopter was returning from a mission supporting on-the-ground troops in combat and was out of cannon rounds.

“When clearance finally came in to take out the target, the pilot used the munition that was available,” the website stated.

That munition was a Hellfire laser-guided air-to-surface missile. Hellfires were originally designed to bust armored vehicles, but were later adopted for a variety of situations, including strikes against individuals. The roughly 100-pound missile can take out its target from 26,000 feet away.

It is not clear where or when the incident captured in the video happened, but it was most likely in Afghanistan, where the Taliban still controls about 10 percent of the territory.

The war in Afghanistan, in its 17th year, has been the longest in the American history.

“Nearly 16 years after September 11 attacks, after the extraordinary sacrifice of blood and treasure, the American people are weary of war without victory,” President Donald Trump said in his Aug. 21 speech at Fort Myer in Arlington, Virginia, where he announced his Afghan strategy.

Trump described three changes in the approach to the war.

First, military decisions, like troop increases or withdrawals, will be based on the situation on the ground and won’t be announced publicly.

“America’s enemies must never know our plans or believe they can wait us out,” Trump said.

Second, America won’t try to impose a particular form of government in Afghanistan.

“We are not nation-building again. We are killing terrorists,” Trump said.

Third, increase pressure on neighboring Pakistan to stop providing a safe haven for terrorist groups, including the Taliban.