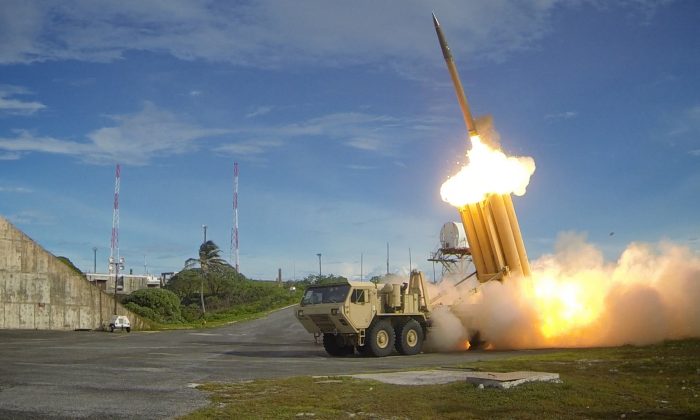 A Terminal High Altitude Area Defense system (THAAD) is seen firing an intercepter in a Department of Defense photo. (DoD photo)
US News

The U.S. military is working on several fronts to increase and improve its defense systems, which can guard against potential ballistic missile attacks from countries including Russia and China.

Even as the Trump administration is working to negotiate with North Korea on peace and denuclearization on the Korean Peninsula, it is also moving forward with plans to upgrade its missile defense systems in South Korea.

Air Force Lt. Gen. Sam Greaves told Stars and Stripes on June 26 that when it comes to North Korea, “We absolutely hope that diplomacy is successful, but at the same time, we must remain vigilant to provide the capability that’s needed.”

The Pentagon is thus continuing its former plans to upgrade its THAAD high-altitude interceptor, as well as its Patriot lower-altitude batteries deployed on the Korean Peninsula. This will include the introduction of a more powerful Patriot missile called the Missile Segment Enhancement, strengthening communications between the THAAD and Patriot systems, and new technology that will allow a THAAD missile launcher to cover a wider area.

In Hawaii, the U.S. military is also working on similar programs, according to AP, in which it aims to build a $1 billion missile defense radar that can identify any ballistic missiles fired from North Korea or elsewhere heading toward the United States.

At the same time, the United States is working to persuade India to drop its ballistic missile defense deal with Russia, which would install Russia’s S-400 missile defense system in the country.

According to The Economic Times of India, the alternative for India would likely be the U.S. THAAD system. It notes that the U.S. Congress is debating a bill to sanction Russian defense entities, which would also impact countries that purchase Russian weapons.

It adds, however, that U.S. Secretary of Defense Gen. Jim Mattis has proposed a waiver for India, which has a strong defense partnership with Russia, under the condition that India works to reduce its military dependence on Russia.

Alongside these programs, the Pentagon is also working to synchronize its missile defense systems.

According to the C4ISRNET military news website, the U.S. Missile Defense Agency announced a successful missile defense tracking exercise in New Mexico in April, which may lead to similar tests in the future. It notes that the tests, which were conducted with the Army, demonstrated how the THAAD and Patriot systems can work together.

Lt. Gen. Samuel Greaves, director of the Missile Defense Agency, told the outlet that the findings on how the two systems can be synchronized build on the “effective, layered defense” capabilities of the interceptors in the Ballistic Missile Defense System.