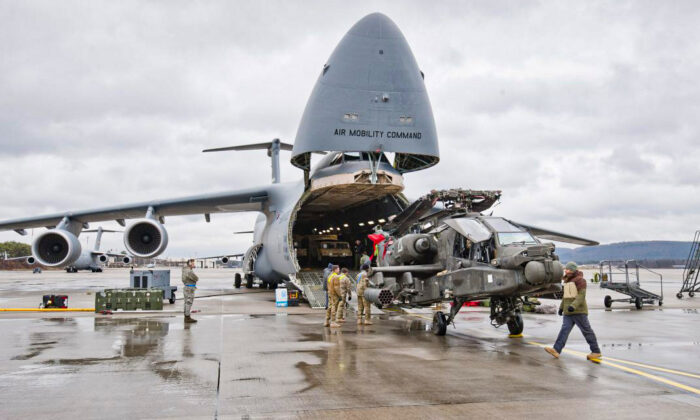 An Apache attack helicopter is being unloaded from a Galaxy C-5 transport plane at the US Air Base in Ramstein, western Germany, on Feb. 22, 2017. The first attack helicopters of the US Army, intended to be deployed during military exercises with NATO partners for the operation "Atlantic Resolve", arrived for a stopover in Ramstein. (MARTIN GOLDHAHN/AFP/Getty Images)
By Gary Bai

An overseas U.S. Air Force Base has canceled a children’s storytime hour program featuring a drag queen after a Republican congressman demanded the show be dropped.

The Ramstein U.S. Air Force Base in Germany canceled the event initially planned for June 2 called “Drag Queen Story Time” after Sen. Marco Rubio (R-Fla.) sent a letter on May 26 to Air Force Secretary Frank Kendall urging him to cancel what the congressman called a “public-funded propaganda.”

“I urge you to immediately cancel this politically divisive event, and take appropriate disciplinary action against all involved in allowing this gross abuse of taxpayer funding to place children in a sexualized environment,” Rubio’s letter reads.

The event was to feature drag queen Stacey Teed at the military base’s Ramstein Library and was intended to celebrate the month of June as “pride month.”

“We’re celebrating Pride Month at the Ramstein Library with Drag Queen Storytime!” the now-deleted event announcement on Facebook read. “Join us with special guest reader Stacey Teed! Be sure to wear your brightest and most colorful outfits!”

In his letter, Rubio noted that U.S. military bases are for warfighting, and the purpose of amenities in these bases, such as schools and libraries, is to support the needs of service members and their families.

“On installations outside the continental United States (OCONUS), these amenities play an even more central role in the life of our servicemembers and their families,” Rubio said. “In light of this, it is completely insane for Ramstein [Air Force Base] to use on-installation resources for rituals like ‘Drag Queen Story Time.’”

Rubio described events like the Ramstein Library’s “Drag Queen Story Time” as “extremely divisive,” because they cause children to interact with “intentionally and explicitly sexualized” adults.

“As I hope you can agree, decisions over children and their bodies should be left to moms and dads serving our nation, not mediated through publicly funded propaganda on U.S. Air Force bases,” the congressman said.

Queer author Michelle Tea was the first to coordinate “Drag Queen Story Hour” events in San Francisco in 2015. The events generally involved a grown male dressed as a female telling queer-related stories to children from 3 to 8 years old.

An example of materials featured at these events, according to Rubio, include books such as “The Hips on the Drag Queen Go Swish, Swish, Swish.”

“The author of the book said they wrote it so that children could ‘experience the magic of drag and to get a little practice shaking their hips or shimmying their shoulders to know how [they] can feel fabulous inside of [their] own bodies,’” Rubio said.

“The last thing parents serving their nation overseas should be worried about, particularly in a theater with heightened geopolitical tensions, is whether their children are being exposed to sexually charged content simply because they visited their local library,” the congressman added.

An Air Force spokesperson confirmed with The Epoch Times on June 1 that the event had been scrapped due to scheduling conflicts, and not as a result of “individuals speaking out against the event or against the LGBTQ+ community.”

The spokesperson said in an email that wing leaders of the 86th Airlift Wing had “requested the event be broadened to represent the full LGBTQ+ community,” but “the 86th Force Support Squadron was unable to modify the event in time for the June 2 scheduled event,” and therefore the support squadron decided to cancel the event.

This article has been updated to include comments by the 86th Airlift Wing Public Affairs Office.