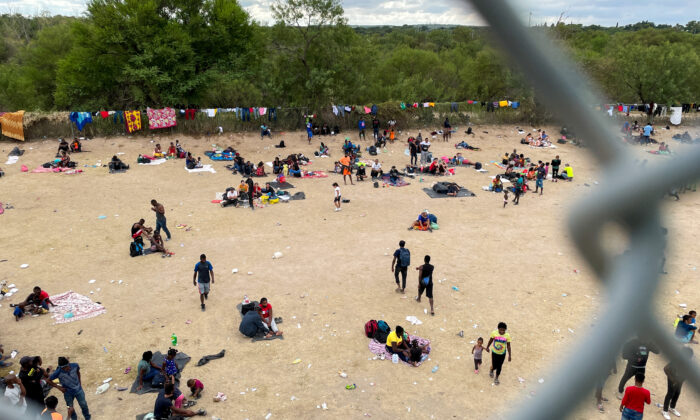 Arrests at the United States’ southern border topped 200,000 for a second consecutive month and remain on track to set a new yearly record, according to newly released data.

Most of the illegal immigrants caught were single adults, nearly 100,000, while approximately 80,000 people who were arrested were part of a family unit. About 18,500 unaccompanied children were apprehended.

“The men and women at CBP continue to step up to meet the demands of high numbers of encounters at our southern border,” Acting CBP Commissioner Troy Miller said in a statement.

The number of border arrests had gone up for 16 straight months, starting during the Trump administration, after hitting a low of just 17,106 in April 2020, shortly after the COVID-19 pandemic started.

In one such policy change, the Biden administration stopped using Title 42 powers, activated because of the pandemic, to expel unaccompanied minors, with officials arguing that doing so would be cruel. Expulsions of other illegal immigrants through the powers have also dropped. Officials used the powers on under half of the encounters in August, after previously utilizing them on over 60 percent early this year.

The new numbers bring the total number of encounters for this fiscal year to 1.54 million. That means the Biden administration could eclipse a fiscal year record, depending on the flow in September. The current record is 1.64 million, set in 2000.

Even if that doesn’t happen, the administration is almost certain to set a calendar year record, Steven Kopits, president of the conservative Princeton Policy Advisors, told The Epoch Times last month.

Many migrants kicked out of the United States aren’t being dissuaded from trying again, data show. A quarter of the immigrants arrested in August had at least one prior encounter with U.S. agents in the prior 12 months, a jump from 14 percent in previous years.

Portman said he looks forward to Homeland Security Secretary Alejandro Mayorkas testifying before the panel next week. He plans “to ask him when the administration will change course and address this surge of unlawful migrants,” he said, adding, “I urge the Biden administration to take action because the migrant crisis is a direct result of its decision to dismantle the previous administration’s policies with no consideration of the historic influx it would incite.”

Sen. Gary Peters (D-Mich.), the chairman of the panel, didn’t immediately respond to a request for comment, nor did the White House, which hasn’t commented on the numbers.