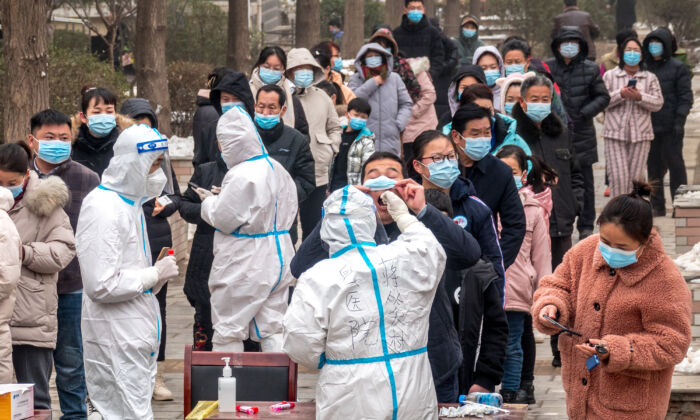 Beijing’s “zero-COVID” policy is subjecting China to sporadic lockdowns and restrictions that state media, as well as some Western media, are supporting.

“US media outlets now recognize China’s zero-COVID policy. Is it too late for them?” wrote China’s state-run news tabloid Global Times, touting the fact that some U.S. media outlets are supporting the Chinese Communist Party’s (CCP) ongoing lockdowns and restrictions.

According to The Economist, adherence to the CCP’s “dynamic” zero-COVID strategy is a test of loyalty. And some American journalists are criticizing the West for not following the CCP’s example.

NPR published an article, headlined “What the U.S. can learn from China’s response to COVID infections,” which suggests that the United States should follow China’s lead in its ongoing zero-COVID policy rather than easing restrictions. The authors assert that “this approach has had impressive results for China.”

Reuters, while not directly praising China, reported that a Chinese study had shown that easing restrictions in COVID-zero regions “could cause 2 million deaths in a year.” This story supports the CCP’s claims that restrictions are preventing deaths. It also implies that the pandemic will never end, with people continuing to die at a rate of 2 million per year.

The CCP’s plans for perpetual restrictions are reflected in the statement of the Chinese Center for Disease Control and Prevention’s top epidemiologist, Wu Zunyou, who said, “We previously thought COVID-19 could be basically contained through vaccines but now it seems that there’s no simple method to control it except with comprehensive measures.”

Another Western media outlet, The BMJ, published a collection of articles that “sheds light on China’s pandemic experience and draws out lessons for the rest of the world.”

The New York Times wrote: “China’s zero-Covid policy has kept deaths very low. Can it continue?” This title and the subsequent article suggest that the containment measures save lives, but that they may be difficult to keep in place.

The Wall Street Journal ran an article, headlined “China’s ‘Zero-Covid’ Policy Holds Lessons for Other Nations.” It stated that the measures “enable China to suppress infections with less disruption to life than in countries where pandemic still rages.”

More than two years into the pandemic, China still has sporadic lockdowns and restrictions. If we have learned anything from Beijing’s zero-COVID policy, it is that such measures disrupt lives but do not end the pandemic.

The Global Times cited Western articles that supported the wisdom of the CCP’s approach to the pandemic. It stated, “In a recent Bloomberg article, entitled ‘Why the World Needs China’s Covid-Zero Policy,’ which affirms the role China’s dynamic zero-COVID policy has been playing in safeguarding global supply chains.”

As preposterous as it is to believe that the CCP is safeguarding global supply chains with its ongoing restrictions, this story is a huge propaganda win for the CCP. It not only celebrates the “altruism” of the Party, but it promotes continued lockdowns and restrictions in the United States and elsewhere. And this suits the CCP, which is attempting to export its zero-COVID policy to Hong Kong and the West.

Hong Kong is currently facing its most severe COVID outbreak since the pandemic started and Beijing is encouraging the city to lock down. However, the decision is up to Chief Executive Carrie Lam, who assured citizens that widespread lockdowns will not be imposed. This has prompted a harsh response from mainland netizens who accuse Hong Kong officials of “worshiping Western values” and lacking “faith in China’s ‘dynamic zero covid’ strategy,” according to The Economist.

The inconsistency of China’s containment policies suggest that they may not be as scientific or as necessary as the CCP would have one believe. “To keep out Covid-19, China closed some border gates late last year, leaving produce to rot in trucks,” wrote The Journal. China is the world’s largest importer of agricultural products. If the risk of importing COVID on products were real, then the CCP should be halting all shipments, not just some.

The CCP claims that its zero-COVID policy is protecting global supply chains, but neighboring countries are suffering reductions of both imports and exports, causing shortages as well as a loss of income.

When asked about the damage the policies were causing, Foreign Ministry spokesman Wang Wenbin responded, “China adopts necessary Covid-19 protocols … with a responsible attitude toward the life and health of Chinese and foreign citizens,” according to The Journal.

So far, China seems to be the only country that claims that COVID can be transmitted on imported foods. Apart from closing its borders and letting food rot, the CCP closed supermarkets. The CCP also temporarily suspended imported fruit from Vietnam and shrimp from Ecuador. If there was a real danger of contracting the disease from food originating in these countries, a temporary ban would not be consistent with a zero-COVID policy. Since no changes were made in either Vietnam or Ecuador, the risk should have remained the same when the bans were lifted.

China’s top disciplinary body, the Central Commission for Discipline Inspection (CCDI), claimed in an article that the zero-COVID policy is cost-effective because it allows the government to lock down some communities while others remain open. Meanwhile, in the West, although there are still restrictions in most countries, there are no lockdowns. Regardless of how the CCP skews the numbers, zero lockdowns would be cheaper. The CCDI claimed that the “destructive power” of easing restrictions has become evident in the West.

The CCDI explained that the reason why the ongoing, rolling lockdowns helped the Chinese economy was because they drove the economy toward investment in industry, making it “less driven by consumption and services.” This is, however, the exact opposite of Xi Jinping’s economic strategy, which was to concentrate on consumption-led growth, supported by the service sector. As a direct impact of the intermittent restrictions, the service sector is growing at the slowest rate in five years.

With border restrictions, periodic lockdowns, ongoing mass testing, and decimated sectors of the economy, a Bloomberg article claimed that the “pandemic has revealed Americans to be tacit Social Darwinists, while trapping the Chinese in a vast Panopticon.” The article, headlined “China’s Covid Victory Over America Turns Out to Be Pyrrhic,” is saying that the CCP’s zero-COVID strategy was successful at saving lives, but that the cost was too high for America and other countries to adopt.