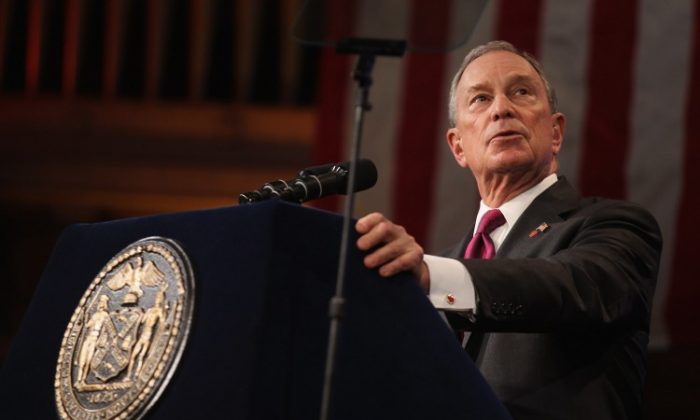 New York Mayor Michael Bloomberg at the State of the City address in New York Jan. 12. Mayor Bloomberg spoke about education reform in an address at the Conference of Mayors in Washington, D.C., Jan. 20. (Mario Tama/Getty Images)
US

US Mayors Meet in Washington, D.C. for Annual Conference

About 250 mayors of cities all across the country convened in the nation’s capital last week from Jan. 17–20 for the United States Conference of Mayors Annual Winter Meeting, where they discussed issues confronting U.S. cities, including the double-digit unemployment in many urban areas, transportation, and public safety issues. The mayors also challenged Congress and the federal government to act on issues facing urban and suburban areas, and discussed federal-city relations.

One notable attendee and speaker was New York City Mayor Michael Bloomberg, who spoke at length about the need for education reform across the country, endorsing teacher evaluations, stressing the need for accountability through standardized testing, and voicing his support for charter schools.

The mayor also illuminated his own belief that there are tough practical challenges facing education reform in the country, as well as challenges from both sides of the ideological divide.

Bloomberg said, “In New York and all around the country, the most promising and successful education reforms are under attack from ideologues on both the right and the left.” On the subject of national standardized testing, he quoted former Secretary of Education William Bennett, saying, “The right will never accept anything with the word ‘national’ in it, and the left will never accept anything with the word ‘testing’ in it.”

Bloomberg also spoke at length about the need to hold teachers accountable for their performance, and the issue of teacher unions.

“[New York] Gov. [Andrew] Cuomo and I both strongly support the right to organize and bargain,” said Bloomberg. “But we in government, and we the citizens who pay for it, have to decide what we’re willing to do and what we’re not willing to do, and I think what we should not be willing to do is to have teachers who are ineffective in the classroom, because we are leaving a bunch of our kids out in the cold, without the skills they’re going to need to be self-supporting.”

Former Obama chief of staff and Chicago Mayor Rahm Emanuel also attended the conference, speaking about education and economic opportunities in urban areas and emphasizing the importance of community colleges in the Chicago area.

The gathering of mayors took place a day after the U.S. Conference of Mayors released a report citing anemic economic growth in U.S. cities during the past year.

According to the report, 125 metro areas had no net job growth by the end of 2011. The report forecasts weak or mild job growth for metropolitan areas in the coming years, and predicts that 22 percent of the metro areas hardest hit by the housing crisis will take about five years to recover.

As a result, the Conference of Mayors is pushing Congress and the federal government to act more forcefully to resolve the weak job growth in many of America’s urban areas.

“The economic recovery is too slow, and it is a direct result of the inaction of this Congress in 2011. … If we gave the 112th Congress a midterm report card, the grade would be clear. Congress would get an ‘F,'” said Los Angeles mayor and President of the U. S. Conference of Mayors Antonio Villaraigosa. “When Congress returns to session, it must make a down payment on America’s economic future by investing in our cities.”