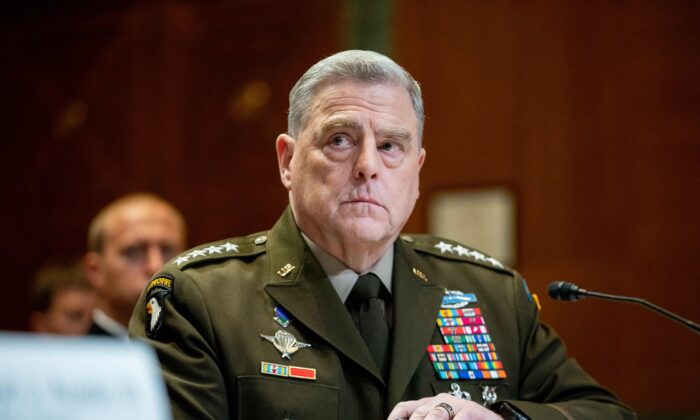 Chairman of the Joint Chiefs of Staff Gen. Mark Milley testifies before the Senate Appropriations Committee Subcommittee on Defense on Capitol Hill in Washington, on May 3, 2022. (Amanda Andrade-Rhoades/Pool/AFP via Getty Images)
Russia-Ukraine War

US May Send American Troops to Ukraine to Safeguard Reopened Embassy: Gen. Milley

Plans to send American forces back into the Ukrainian capital Kyiv are being considered for the protection of the U.S. Embassy, said the Chairman of the Joint Chiefs of Staff, Gen. Mark Milley, to reporters at the Pentagon on Monday.

“Some of the things that may have been out there in the media, those are planning efforts that are underway at a relatively low level,” Milley told reporters, possibly referring to a Wall Street Journal report.

The May 23 report talked about the diplomatic balancing act by White House officials to send in troops to safeguard the newly-reopened embassy during times of war, risking personnel safety on one hand, while avoiding escalating the conflict.

The U.S. Embassy was shut down 10 days prior to the Russian invasion, and was reopened on May 19 after a three-month closure. Embassy staff worked out of Poland for the first two months of the war but Charge d’Affaires Kristina Kvien returned to the country on May 2.

Other countries like the UK, France, and Germany have reopened embassies after Russian forces focused their offensive on the eastern parts of the country.

If the military is deployed, it would be special forces for the defense and security of the embassy that lies within range of Russian missiles. President Joe Biden earlier made assurances that no U.S. forces would be sent into Ukraine.

The proposals to send in troops “have not yet made it to [Defense Secretary Lloyd Austin] or myself for that matter, for refinement of courses of action and what’s needed,” said Milley. Any deployment of U.S. troops would require a presidential decision.

“We’re a ways away from anything like that. We’re still developing courses of action, and none of that has been presented yet to the secretary,” Milley added.

The Biden administration reopened the U.S. Embassy in Kyiv on May 18 after closing it ahead of Russia’s Feb. 24 invasion of Ukraine.

Russian forces continue to hit Kyiv intermittently. On April 28, two Russian missiles struck the central Shevchenko district of the city and lower floors of a 25-story residential building, wounding at least 10 people, according to reports from Ukrainian forces.

The strikes happened during a visit to Ukraine by the head of the United Nations.

There are concerns whether bolstering troop presence could provoke the Russian forces to attack the capital again, and cause harm to staff members working in the embassy. At present, State Department diplomatic security officials provide protection for embassy personnel.

Bridget Brink was confirmed by the Senate as the new U.S. ambassador to Ukraine. She has not yet arrived in the country.