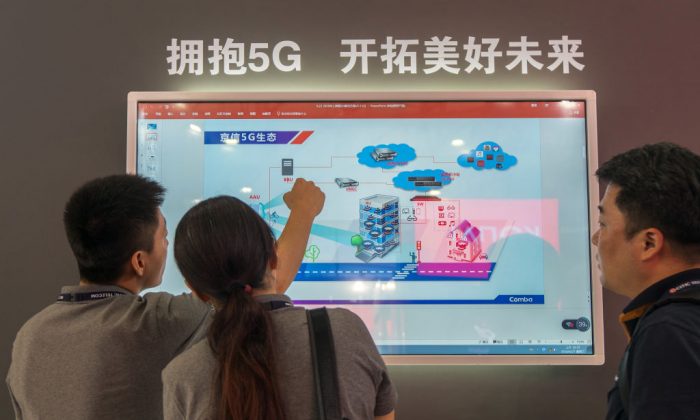 People watch a screen showing information on 5G technology during the Mobile World Conference in Shanghai on June 27, 2018. (-/AFP/Getty Images)
US News

US May Lose Ground to China in 5G Race, Experts Warn

WASHINGTON—A commission of experts formed by the U.S. Congress has warned that China’s ambitions to control the next generation of mobile networks will have significant implications for U.S. competitiveness, data privacy, and national security.

The U.S.–China Economic and Security Review Commission (USCC) states in a report that the Chinese government is heavily investing in the fifth-generation wireless technology (5G) networks. Significant state funding for 5G deployment is part of the communist regime’s comprehensive industrial blueprint to cement technological dominance globally and reduce China’s dependence on foreign technology.

5G, which will replace the fourth-generation mobile (4G) network, has the potential to increase data speeds by 100 times and transform the internet. It also enables energy saving and widespread device connectivity through the Internet of Things (IoT). Since it is a software-defined network, it could replace the need for cables by largely operating on the cloud.

International 5G standards will be set by 2019 and large-scale commercial deployment is expected by 2020. It faces, however, multiple hurdles, the most significant of which is cost. Huge investments are needed for this next-generation wireless network.

5G and subsequent technologies are expected to bring trillions in economic benefits, and U.S. and Chinese companies are engaged in a fierce competition to secure first-mover advantage in the race.

The Chinese government is supporting its companies to lead in international 5G standards to ensure they set global standards. Such leadership may result in higher revenues for China and more global control over future wireless technology and standards development, USCC warns in the report.

The Chinese government, telecom operators, and local companies such as Huawei and ZTE are working hard to be at the forefront of equipment production for this new technology.

According to the report, China already dominates in global network equipment, which raises serious supply-chain concerns about the secure deployment of 5G networks in the United States. In addition, China is the world’s largest manufacturer of IoT devices, which collect enormous amounts of user information.

U.S. data could be exposed through these devices and the Chinese regime could hold broad powers to access U.S. personal and corporate data, the report added.

The report also contains a number of recommendations on countering potential security issues posed by Beijing’s industrial policies to advance the IoT and 5G technologies.

It also advises Congress to direct the National Telecommunications and Information Administration and Federal Communications Commission to ensure the rapid and secure deployment of 5G technology “with a particular focus on the threat posed by equipment and services designed or manufactured in China.”

“The United States is already the global leader in 4G technology,” White House stated in a report. “To lead in 5G and reap the benefits of better and faster wireless connections, we must have a forward-looking, strategic spectrum policy.”

The research firm GSMA Intelligence forecasts that there will be 1.3 billion 5G connections by 2025, however, this depends on governments’ ability to make enough spectrum available.

Governments need to allocate sufficient spectrum to next-generation mobile services to make them more affordable and accessible for everyone, according to GSMA.

AT&T, Verizon Communications, Sprint, and T-Mobile are working to acquire spectrum and beginning to develop and test 5G networks.

Since 2015, China exceeded the United States by approximately $24 billion in mobile communications infrastructure spending, according to the consulting firm Deloitte. China built 350,000 new sites during that period. Meanwhile, the United States developed fewer than 30,000, a Deloitte report said.

“Looking forward, China’s five-year economic plan specifies $400 billion in 5G-related investment. Consequently, China and other countries may be creating a 5G tsunami, making it near impossible to catch up,” stated the report.

Recognizing the IoT’s enormous economic and military potential, the Chinese government made the IoT and its enabling technologies such as 5G and Artificial Intelligence cornerstones of its blueprint “Made in China 2025.”

In the industrial plan, unveiled three years ago, the Chinese regime announced the goal of achieving dominance in 10 high-tech industries by 2025, including advanced information technology, robotics, aviation, and new energy vehicles.

To realize its economic ambitions, the regime has been resorting to various tactics, including industrial espionage, cyber theft, heavy government subsidies, forced joint ventures in exchange for market access, and acquisition of foreign companies to attain sensitive technologies.