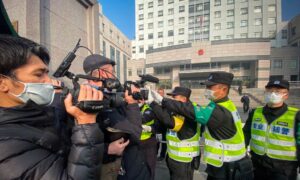 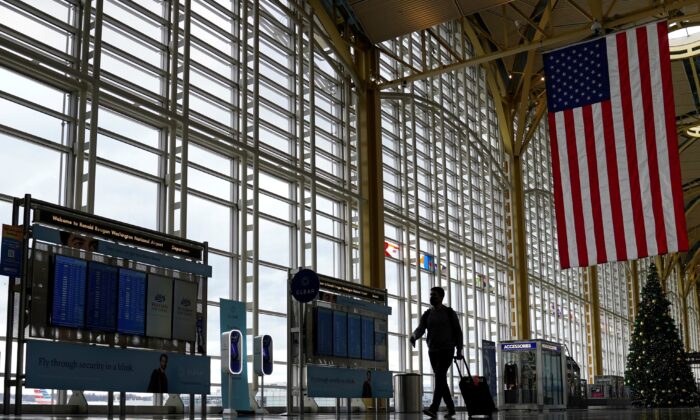 A traveler walks past a Christmas tree as he makes his way through the Ronald Reagan Washington National Airport, in Arlington, Virginia, U.S., December 22, 2020. (Kevin Lamarque/Reuters)
AMERICA

US May Expand Required COVID-19 Testing To More International Passengers

The Centers for Disease Control and Prevention (CDC) and other U.S. agencies held a lengthy call with U.S. airlines Wednesday that discussed expanding COVID-19 test requirements to travelers arriving from other countries, sources briefed on the call said.

The U.S. government on Monday began requiring all airline passengers arriving from Britain—including U.S. citizens—to test negative for COVID-19 within 72 hours of departure.

The CDC said in a statement Wednesday that “efforts are currently ongoing in the U.S. to assess the risk reduction associated with testing and other recommended preventative measures, determine what a feasible testing regime for air travel may look like, and gain some level of agreement on standards for a harmonized approach to testing for international air travel.”

Airlines told government agencies on Wednesday any new testing requirements should be phased in by country and it must be determined if there is enough testing capacity and a willingness to allocate those tests to facilitate international travel before expanding requirements, the sources said.

Officials said the White House could make a decision as early as next week on adding new countries to the testing requirements but it is not clear when those new requirements would take effect.

On Tuesday, U.S. Assistant Secretary for Health Brett Giroir said coronavirus testing for UK travelers should probably be extended to other countries.

One issue is whether the White House would drop restrictions that bar most non-U.S. citizens from coming to the United States if they have been in much of Europe or Brazil within the last 14 days as part of new testing requirements.

Giroir noted Tuesday the restrictions have led to a 90-95 percent decrease in travel from Britain.