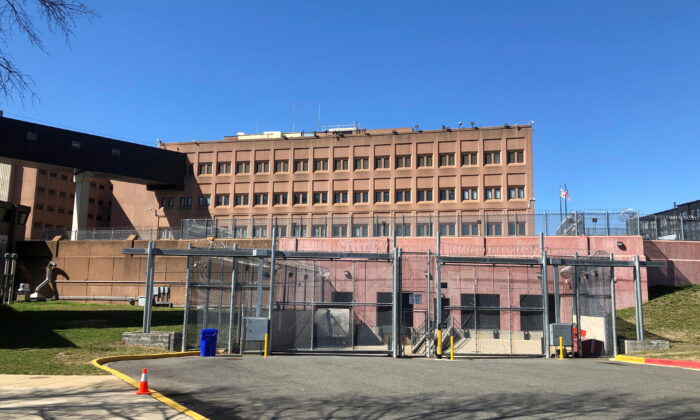 The District of Columbia Jail is seen in a file photograph. (Angus Berwick/Reuters)
US News

Many people charged with crimes in connection with the Jan. 6 breach of the U.S. Capitol are being held in the Central Treatment Facility (CTF), including Robert Gieswein.

The Marshals conducted a surprise inspection of the jail in the fall of 2021. Acting U.S. Marshal for the District of Columbia Lamont Ruffin said at the time officers found “evidence of systemic failures,” including evidence water was shut off to inmates as punishment, in another part of the jail, the Central Detention Facility.

He also said conditions at the CTF “were observed to be largely appropriate and consistent with federal prisoner detention standards.”

However, U.S. Attorney Matthew Graves said in a new filing in Gieswein’s case that the Marshals have been monitoring conditions in both portions of the District of Columbia jail and have, in the intervening time, “observed additional deficiencies in its monitoring, including several deficiencies at CTF.”

The service was ordered by the court to produce a report on conditions at the lockup. The service will provide that report to federal judges in Washington later this week, according to Graves.

He asked for an additional week to respond on behalf of the service with respect to conditions at jail “because the information in that report is being verified.”

Public defenders representing Gieswein said in a separate filing they didn’t object to giving the government an extra week to respond but asked the court not to delay a hearing scheduled for Jan. 19.

One of the attorneys declined to comment while the D.C. Department of Corrections (DOC) and the U.S. Marshals did not respond to requests for comment.

Conditions at the jail have been judged lacking for months, prompting an order to transfer over 400 inmates from the facility to other jails.

U.S. District Judge Royce Lamberth, a Reagan nominee, in October 2021 held jail officials in contempt for violating a Jan. 6 defendant’s civil rights by impeding access to medical care. The following month, he ordered the defendant released over the issue.

Around the same time, multiple defendants were removed from their cells on stretchers after guards reportedly began spraying a chemical substance and didn’t stop for 15 minutes.

Defendants have complained about substandard care, including alleged assaults by guards in addition to lack of medical care.

Rep. Marjorie Taylor Greene (R-Ga.), who toured the jail with Gohmert, said that the defendants are political prisoners who have been blocked from speaking with attorneys.

Greene told The Epoch Times in an emailed statement that the new disclosure “is more evidence proving the conditions at the DC Gulag are atrocious and inhumane.

“This is more evidence proving J6 pre-trial detainees are being mistreated for being conservative Trump supporters. And this is more evidence proving left-wing political activist Deputy Warden Kathleen Landerkin must be terminated and investigated immediately! When will my Republican conference join me in the fight to stop the two-tiered justice system in America violating human rights?” she added.

DOC officials have said the agency works to ensure detainees’ Constitutional rights and that problems identified by Marshals would be fixed.

A DOC official told the court last week that, since entering into a memorandum of understanding with the Marshals, the agency “has worked tirelessly to correct all verified deficiencies at its correctional facilities, including CTF.”

That includes increasing staff training on agency policies, auditing inspection sheets, assessing conditions daily, and developing a new policy on when and how water can be shut off to inmates.

Additionally, a group of officials including representatives of Washington Mayor Muriel Bowser’s office of legal counsel met on Dec. 24, 2021, to discuss what DOC has done to correct the problems to date and agreed to meet at least once a month to ensure compliance with the rectification efforts, the official said.