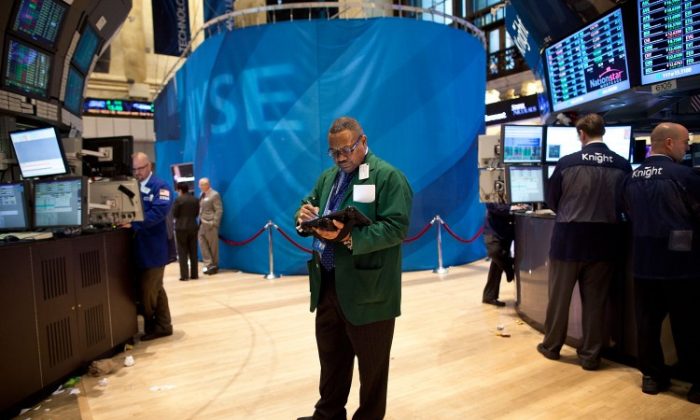 A trader works on the floor of the New York Stock Exchange on March 26. The market soared to a 12-month high after comments made by Ben Bernanke regarding the economy. (Andrew Burton/Getty Images)
Business

In a speech Monday at the National Association for Business Economics in Arlington, Va., Bernanke said that although he was encouraged by the 8.3 percent official jobless rate in the United States, a further drop in unemployment may not be sustainable. More job growth would require further business production and consumer spending, which “can be supported by continued accommodative policies,” he declared.

The chairman echoed the remarks he gave earlier this month, following a meeting of the Federal Open Markets Committee, that the unemployment rate remains high and that he planned to keep rates near zero until at least 2014 to help stimulate economic growth. For example, a sustained unemployment decline would need to be supported by GDP growths of at least 4 percent per annum. Last year, the U.S. economy expanded 2 percent.

Bernanke is tasked with balancing economic growth while keeping an eye on inflation. Roughly 1.2 million jobs were added over the last six months in the United States, which is the most since mid-2006. The 8.3 percent unemployment rate is the lowest since 2009.

While Bernanke said nothing groundbreaking, investors took it as an affirmation of the continuation of loose monetary policy.

All S&P sectors were in the black on Monday, led by the health care and technology sectors.

Shares of Lions Gate Entertainment jumped 4.5 percent on Monday following a huge opening weekend for its post-apocalyptic film “The Hunger Games,” which pulled in $155 million after it opened Friday at midnight.

Gold futures also surged, closing at more than $1,685 an ounce.