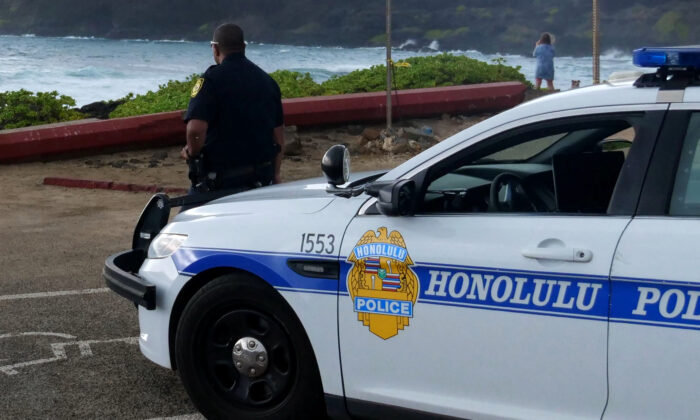 File photo of a police car in Honolulu, Hawaii. (Ronen Zilberman/AFP via Getty Images)
US News

US Marine in Custody After Stabbing Death of Wife in Hawaii

HONOLULU—An active-duty U.S. Marine accused in the stabbing death of his wife is in custody and facing a second-degree murder charge.

The Honolulu Police Department said Saturday that Bryant Tejeda-Castillo was being held on $1 million bail.

Police say he was captured shortly after the Wednesday killing of 27-year-old Dana Alotaibi along a freeway. Police say he was taken to the Queen’s Medical Center in Honolulu with what one witness said were several self-inflicted wounds.

Alotaibi’s friends said she was pregnant, but police said they are awaiting autopsy results.

A police spokesman on Saturday said he didn’t know if Tejeda-Castillo remained at the hospital or had been transferred elsewhere. Tejeda-Castillo was arrested on a warrant of second-degree murder.

Alotaibi’s mother, Natalia Cespedes, told Hawaii News Now that her daughter faced abuse from her husband and was able to get the military’s version of a restraining order against Tejeda-Castillo, who was stationed on the island of Oahu.

Cespedes said she believes her daughter would still be alive if military officials had acted on her daughter’s requests for help.

In a statement, the U.S. Marine Corps said it was aware of the situation.

“We can confirm that the Marine suspect’s command was engaged with both him and the victim, and were responsive to those allegations and concerns that the command was made aware of,” it said. “Due to the ongoing nature of the criminal investigation, it would be inappropriate to comment further on this topic.”

Witnesses who stopped to help after the stabbing described as a horrific scene.

“I ran there and told him to let her go,” George Schmidt told Hawaii News Now. “I just seen blood all over her, she was full of blood.”

He said he saw the suspect wound himself.