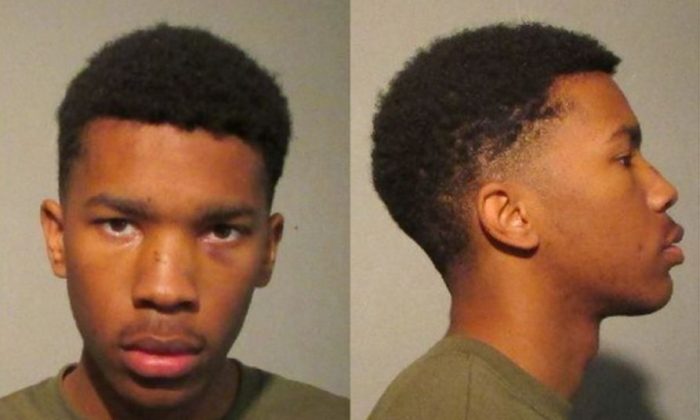 A U.S. Marine was arrested on Tuesday in connection with the fatal shooting of a 20-year-old student on New Year’s during a road rage incident in Denton, Texas.

Eric Jamal Johnson was arrested by U.S. Marshals at a military base in Yuma, Arizona, on a murder charge, reported the Dallas Morning News. He’s a corporal assigned to the aviation weapons and tactics squadron, the Marines said in a news release.

Johnson “was taken into custody at approximately 6:30 a.m. at the North Gate of the installation in fulfillment of a warrant issued in connection to an alleged shooting in Denton, Texas,” the Marine Corps said, adding there’s an ongoing investigation from several law enforcement agencies.

The victim in the slaying, Sara Mutschlechner, was the designated driver for her friends in Texas on the early morning of New Year’s Day when men in a black SUV pulled up next to her vehicle and spoke with them, Denton police officer Shane Kizer told ABC News.

The exchange of words was “peaceful at first” but then, the suspects “made some comments towards the girls, and it escalated from there,” he added.

The comments made at the women “very derogatory … in a sexual nature,” Kizer added in a press conference.

Kizer said two to three shots were fired at the woman’s car before Mutschlechner, who was driving sorority sisters from Zeta Tau Alpha, lost control and hit an electrical pole. Police were called at around 2 a.m. Another woman in the car was hospitalized with a broken collarbone.

Our thoughts are with the sisters, family and friends of Gamma Phi Chapter (University of North Texas) member Sara…

“There are so many people that knew her, that she touched their lives,” her father, Clay Mutschlechner, told ABC. “She never met a stranger.”

“She was friends with everyone,” added mother Gloria Mutschlechner.

The Dallas Morning News reported that Johnson was seen in the SUV with a handgun just before the shooting.