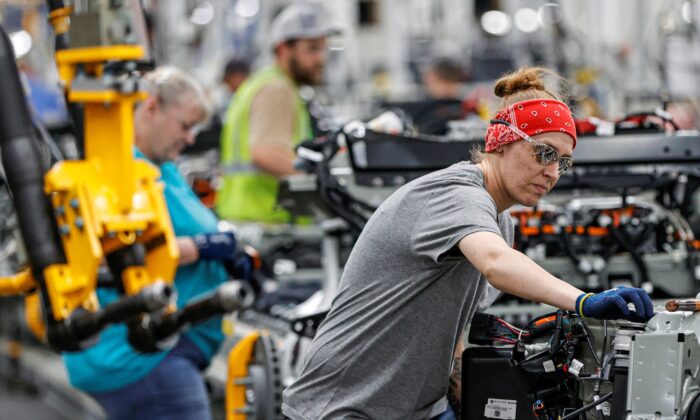 Manufacturing output in the United States declined in May after three months of averaging almost 1 percent growth, according to the latest data by the U.S. Federal Reserve.

Among durables, manufacturing activity in wood products saw the largest drop, with a decline of 2.6 percent, followed by a 2.1 percent decrease in machinery. Among nondurables, petroleum and coal products saw manufacturing activity rise by 2.5 percent, outweighing the 1 percent declines in food, beverage, paper, tobacco products, and printing and support.

Capacity utilization for manufacturing fell to 79.1 percent in May, which was a full percentage point above its long-run average.

“It adds to the evidence that the economy is slowing,” Andrew Hunter, a senior U.S. economist at Capital Economics, said to Reuters. “But there is still little in activity data to suggest a recession is on the horizon, or to dissuade the Fed from pressing ahead with more aggressive policy tightening.”

The manufacturing sector accounts for 12 percent of American activity. Though the strong demand for goods has so far supported manufacturing, consumer spending is slowly moving back to services.

Since March, the U.S. Federal Reserve has hiked its benchmark interest rate by 150 points, with half of the increase coming from a meeting this month. Fed Chairman Jerome Powell has indicated that the agency will do whatever it can to bring down rising prices. The 12-month inflation in May came in at 8.6 percent, the fastest increase since December 1981.

A separate report from business research firm The Conference Board stated that its Leading Economic Index (LEI) indicator fell by 0.4 percent in May, following a 0.4 percent decrease in April. In the six-month period between November 2021 and May 2022, LEI is down by 0.4 percent.

“The US LEI fell again in May, fueled by tumbling stock prices, a slowdown in housing construction, and gloomier consumer expectations,” Ataman Ozyildirim, senior director of economic research at The Conference Board, said in a June 17 press release.

“The index is still near a historic high, but the US LEI suggests weaker economic activity is likely in the near term—and tighter monetary policy is poised to dampen economic growth even further.”

In a June 17 tweet, Liz Ann Sonders, chief investment strategist at Charles Schwab & Co. Inc, pointed out that the May LEI decline was the third consecutive month of decrease registered by the index. This is something that has not happened “since the COVID recession.”