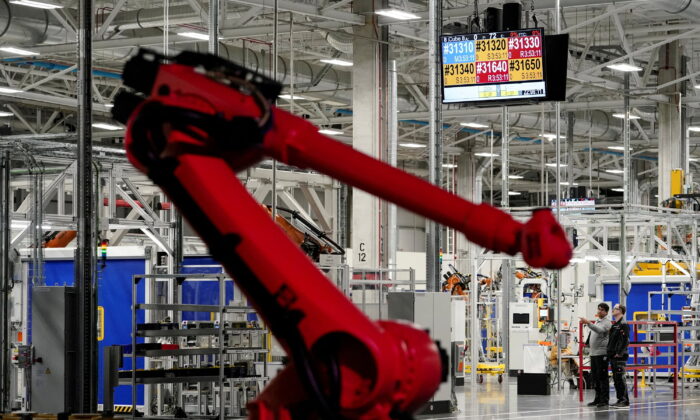 People are seen on the manufacturing floor at the opening of a Mercedes-Benz electric vehicle Battery Factory, marking one of only seven locations producing batteries for their fully electric Mercedes-EQ models, in Woodstock, Ala., on Mar. 15, 2022. (REUTERS/Elijah Nouvelage/File Photo)
Business & Markets

U.S. manufacturing declined last month amid a loss of new orders, signaling troubling times for the sector, according to latest data from S&P Global.

The seasonally adjusted S&P Global U.S. Manufacturing Purchasing Managers Index (PMI) fell to 51.5 in August from 52.2 in July. This is the lowest level since July 2020, stated a news release on Sept. 1. “Barring the initial pandemic lockdown months, this is the steepest downturn in U.S. manufacturing seen since the global financial crisis in 2008–09,” Chris Williamson, chief business economist at S&P Global Market Intelligence, said in the release.

“Worryingly, the sharpest drop in demand was recorded for business equipment and machinery, which points to falling investment spending and heightened risk aversion,” he stated.

A key factor that contributed to weak operating conditions was a decline in new orders in August, the third consecutive monthly fall. Manufacturers also saw a modest decline in new sales, likely the result of muted client demand and an increase in prices. As to external demand, it declined at the second-fastest pace in 27 months.

Payroll growth has slowed and is close to stalling, which is an indication that companies are reluctant to expand their workforce due to deteriorating demand environment, he added.

Interestingly, the ISM Manufacturing PMI data for August reported contradicting conclusions, showing growth in the manufacturing sector and expansion of new orders. However, manufacturing activity was at the lowest level since June 2020, data showed.

Divergence in the two surveys could be due to the fact that while the Standard & Poor’s data reflect smaller manufacturers, the ISM survey leans more toward larger manufacturers.

The weak manufacturing data come as the Biden administration is considering removing some of the tariffs on Chinese imports imposed during the Trump administration.

In an interview with The Wall Street Journal, Commerce Secretary Gina Raimondo said that the president is considering the matter “incredibly seriously.”

Raimondo and Treasury Secretary Janet Yellen are among the cabinet members who believe a limited reduction of tariffs would be beneficial for American businesses and consumers.

“It all depends on exactly how it is done and on which products … but I think there is merit to it,” Raimondo said. “That decision is with the president himself. We have briefed him a number of times.”

Trump had imposed the tariffs in 2018–19 on $350 billion worth of Chinese imports as retaliation for Beijing’s abusive trade practices, such as the theft of American intellectual property, manipulating currency, forced technology transfers, and so on. The tariffs have brought in more than $150 billion in the past 50 months.

These tariffs have somewhat dampened demand for Chinese goods by making them more expensive. In July, Trump had warned that pulling back such tariffs would only benefit China and send a signal that the United States is weak and ineffective.