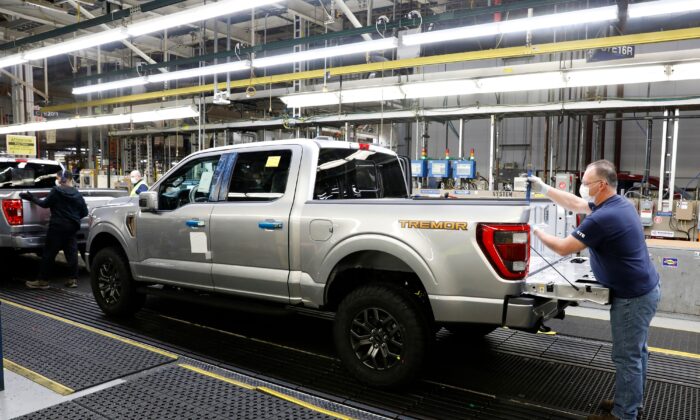 An employee works on a Ford Motor Co. F-Series truck on the assembly line at the Ford Dearborn Truck Plant in Dearborn, Mich., on Jan. 26, 2022. (Jeff Kowalsky/AFP via Getty Images)
Economy

WASHINGTON—Production at U.S. factories increased moderately in January as motor vehicle output fell for a second straight month amid an ongoing global shortage of semiconductors.

Shortages of materials have also afflicted other segments of manufacturing, in addition to the motor vehicle industry.

Spending shifted towards goods from services during the COVID-19 pandemic, but manufacturers have struggled to cope amid an acute shortage of workers on factory floors and other places along the supply chain, caused by the coronavirus.

Manufacturing, which accounts for 11.9 percent of the U.S. economy, remains supported by still-lean inventories at businesses as demand for goods remains strong.

Last month’s gain in manufacturing output combined with a record 9.9 percent jump in utilities to boost industrial production 1.4 percent. That followed a 0.1 percent fall in December.

Demand for utilities was boosted by freezing temperatures in many parts of the country in January. Mining production increased 1.0 percent, with oil and gas well drilling advancing 6.2 percent.