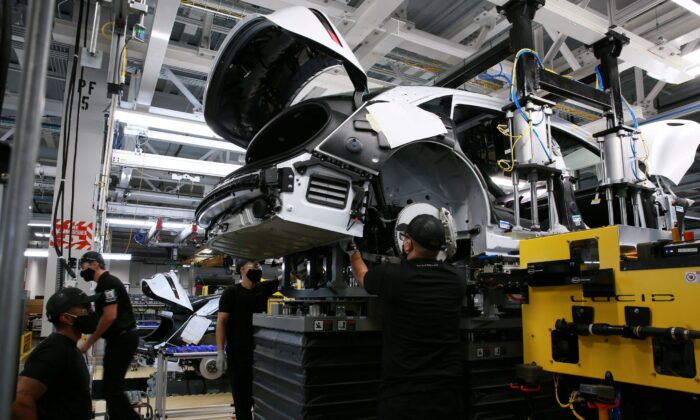 Workers marry the body structure with the battery pack and the front and rear sub frames as they assemble electric vehicles at the Lucid Motors plant in Casa Grande, Ariz., on Sept. 28, 2021. (Caitlin O'Hara/Reuters)
Economy

WASHINGTON—Production at U.S. factories rebounded more than expected in October as the drag from Hurricane Ida faded and motor vehicle output picked up, but manufacturing continues to be constrained by shortages of raw materials and labor.

Output increased 4.5 percent compared to October 2020. Manufacturing, which accounts for 12 percent of the U.S. economy, is being underpinned by businesses desperate to rebuild depleted inventories.

Spending shifted to goods from services over the course of the COVID-19 pandemic, straining global supply chains. Raw materials such semiconductors are in short supply. Workers are also scarce, hampering the delivery of materials to factories as well as the shipment of finished goods to markets.

Even with spending rotating back to services as coronavirus infections driven by the Delta variant subside, demand for goods remains strong.

Consumer goods production rebounded 1.4 percent. But machinery production dropped 1.3 percent because of an ongoing strike at John Deere. Last month’s jump in manufacturing output combined with a 4.1 percent rebound in mining and a 1.2 percent rise in utilities to boost industrial production by 1.6 percent. That followed a 1.3 percent drop in September.

Capacity utilization for the manufacturing sector, a measure of how fully firms are using their resources, increased 0.9 percentage point in October to 76.7 percent, the highest since January 2019. Overall capacity use for the industrial sector rose to 76.4 percent from 75.2 percent in September. It is 3.2 percentage points below its 1972–2020 average.