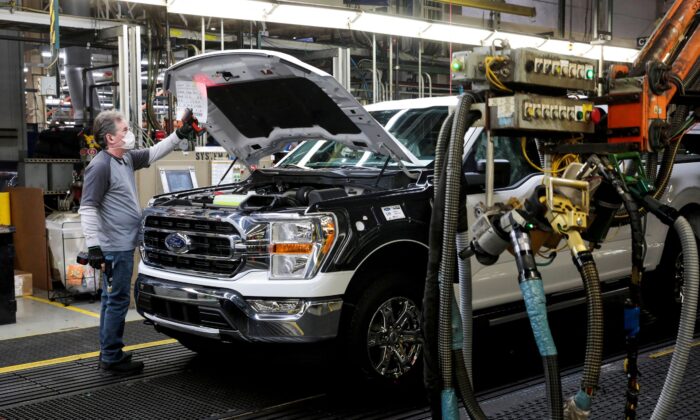 An assembly worker of Ford Motor works on an F-series pickup truck at the Dearborn Truck Plant in Dearborn, Mich., on Jan. 26, 2022. (Rebecca Cook/Reuters)
Economy

U.S. manufacturing activity in July slowed for the second month, albeit less than had been expected, amid news that supply constraints were easing, according to a report by the Institute for Supply Management (ISM) released on Aug. 1.

The post-pandemic glut in inventories and a growing trade deficit caused by global supply chains are key culprits, though overall economic momentum has slowed down after the economy contracted 1.3 percent in the first half of the year.

Manufacturing accounts for 11.9 percent of the U.S. economy, and any reading above 50 indicates expansion in that sector.

The report also showed that the operational costs for manufacturers fell to a two-year low, with some experts claiming that the economy may have hit peak inflation.

The global supply chain crisis appears to be easing for now, as deliveries of supplies have improved, prices have begun to flatten, and as inventories have grown at a faster pace compared with two months ago.

Consumer demand continued to weaken in July, as new orders slumped to a reading of 48 percent, down from 49.2 percent in June, leading the production index to take a hit due to shrinking demand, declining by 1.4 percent, to 53.5 percent from 54.9 percent in June.

The cool down in demand is reflecting both a shift in consumer spending, from goods to services, and the impact of rising interest rates.

Manufacturers are concerned that when these factors are combined with a steady reduction in order backlogs, the sector may continue to slow down through the remaining months of 2022.

Businesses also are still dealing with an overload of inventory, after previously ordering too many items during the pandemic in the second half of last year, hurting contracts for new orders.

Although the survey reported that employment in manufacturing had risen, to 49.9 percent, the figures are in their third straight month of contraction.

Companies continue to hire at relatively high rates for now, and there have been few signs of widespread layoffs outside of the real estate and tech sector.

Hiring freezes and the reduction of employees through attrition have yet to become a concern, as many manufacturers are still expressing difficulty in finding workers, with many positions being left unfilled.

“Although an overwhelming majority of survey panelists again indicate their companies are hiring, they are still struggling to meet labor management plans,” said Fiore.

For example, four out of the six major manufacturing industries, such as the energy sector, computers/electronics, transportation equipment, and machinery, have reported moderate-to-strong growth in July.

The food-processing industry reported that grocers and food distributors are apparently slashing product orders in an effort to reduce inventory, while the textile industry is facing continued delivery and staff shortages that have cut into profits.

Rising inflation is one of the biggest complaints indicated by the survey, though overall price increases for inputs have started to moderate considerably.

Chemical manufacturers, for example, have reported that inflation is slowing down business, along with an excess of raw materials due to the prior supply chain issues, combined with a slowdown in orders.

The Federal Reserve, on July 27, raised its policy rate by another 75 basis points and has raised the rate altogether by 225 basis points since March, as it contends with high inflation.

The ease in the supply chain bottlenecks helped to curb inflation at the factory gate in July, with the measure of prices paid by manufacturers plunging to 60.0, the lowest level since August 2020 and a reduction from 78.5 in June.