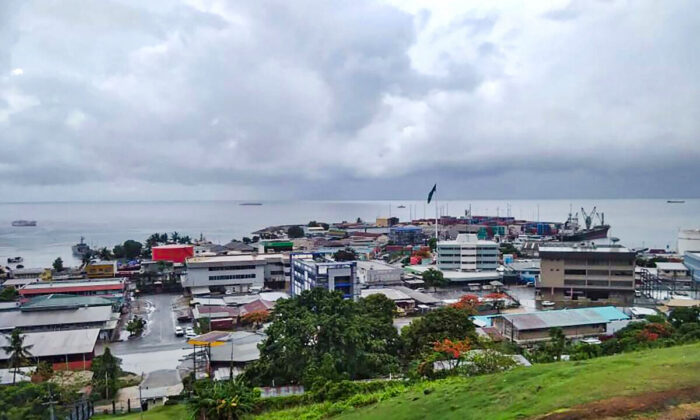 The streets of downtown Honiara, the capital of the Solomon Islands, on Dec. 6, 2021. (Mavis Podokolo/AFP via Getty Images)
Global Expansion

On Aug. 29, the government of the Solomon Islands notified U.S. officials that they had suspended visits by U.S. and other foreign military vessels. The news came after both a U.S. Coast Guard ship and a British Royal Naval ship were denied approval to dock at the Solomon Islands.

These latest developments are fanning fears that the Pacific Island nation is turning away from the United States and moving closer to the Chinese Communist Party (CCP).

On April 20, just days before a U.S. delegation was scheduled to arrive in the Solomon Islands, Prime Minister Manasseh Sogavare announced that the country had signed a security agreement with China. The pact was condemned by local opposition leader Matthew Wale, who said that the agreement was not in the country’s best interests and threatened national unity.

Kurt Campbell, the White House’s Indo-Pacific coordinator, said the pact gave China an inroad in the Pacific. The pact also became a source of worry for the governments of other Pacific island nations that feared the Solomon Islands might allow China to install a military base. New Zealand’s foreign minister, Nanaia Mahuta, said the agreement was “unwelcomed and unnecessary.” Only 1,000 miles away, Australian Deputy Prime Minister Barnaby Joyce also spoke out in opposition to the pact declaring, “We don’t want our own little Cuba off our coast.”

Beijing denies wanting to have a foothold in the Pacific or build a military base in the Solomon Islands. However, according to Wale, the pact would allow China to deploy troops to the island to protect Chinese citizens, personnel, and investment projects. Wale saw no security benefit for his country, which already has agreements with Australia and New Zealand.

In November 2021, responding to a request by Sogavare, Australian troops were deployed to the nation’s capital city Honiara to quell riots targeted at the government and Chinese businesses. Much of the tensions between Sogavare’s government and the people were over the prime minister’s decision in 2019 to rescind political recognition of Taiwan in favor of China. Angry protesters burned down numerous buildings in Chinatown. And Wale issued a call for Sogavare to resign.

Sogavare said the security pact with China was necessary to augment the country’s police capabilities and to better handle riots such as those in November 2021. In August 2022, the CCP sent officers to conduct training for the Solomon Islands police.

Daniel Suidani, the premier of Malaita Province, the country’s most populous island, has been an ongoing opponent of the country’s pro-CCP policies. Suidani maintains unofficial relations with Taiwan while officially rejecting any Chinese investment in his province. Throughout the pandemic, Malaita received COVID-19 aid from Taiwan, and the Taiwanese flag was prominently displayed at public events in the province.

In May 2021, Suidani was granted permission by the government of Taiwan to receive medical treatment in Taipei. He remained in the country for five months despite official protests by the Chinese embassy in Honiara, which issued a statement saying, “China firmly opposes any official contacts in any form between Taiwan and any officials from countries having diplomatic relations with the People’s Republic of China.”

The Pacific island nations are crucial to the U.S. Indo-Pacific defense plans, which are coordinated with Australia, New Zealand, and other allies. It was a blow to the United States, Taiwan, and other democratic nations when Kiribati and the Solomon Islands switched their recognition to China in 2019.

The Pacific island countries of Palau, Marshall Islands, Nauru, and Tuvalu are among the 13 nations still recognizing the independence of Taiwan. The CCP is courting the remaining “friends of Taiwan” by offering aid and police and military training.

In May, China presented 10 pacific nations with a broad economic and security deal called the China-Pacific Island Countries Common Development Vision. This included increased law enforcement cooperation and police training. The agreement was rejected, but the CCP seems intent on winning over more support in the region and stifling U.S. efforts to maintain naval superiority.