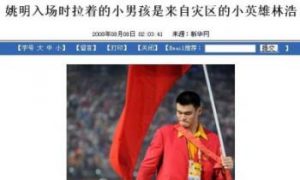 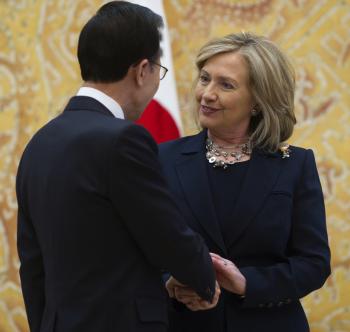 During a three-day visit to South Korea, Secretary of State Hillary Clinton emphasized that the United States is committed to ratifying a free trade with Seoul.

“[W]e are meeting in the home stretch of the Korea Free Trade Agreement, and that is going to be a singular accomplishment of both of our presidents and will contribute so much to the broadening and deepening of our relationship,” said Clinton to South Korean Foreign Minister Kim Sung-hwan on Saturday.

The U.S.-Korea Free Trade Agreement, KORUS FTA, is seen as an important mechanism for strengthening a strategic relationship with Korea. Cooperation on nuclear nonproliferation in the face of an increasing aggressive North Korea, as well as China’s growing influence in the region, make enhancing cooperation between allies an important policy objective.

“I think the FTA is important for foreign policy reasons and a lot of it is because of the need to reassure them of our continued commitment to a strategic relationship,” said William Krist, senior policy scholar with the Woodrow Wilson Center.

The Korean agreement is one of three FTAs negotiated in 2007 by former President George W. Bush. Panama and Columbia are the other two. Ratifying of the agreements was stalled for years due to flaws that were deemed unacceptable for different reasons.

On Korea, a supplemental deal was signed by Obama in December 2010. The new arrangement appeases the concerns of U.S. automakers by delaying the implementation of tariff reductions on Korean imports to the United States, while Korea will be required to lift many of its tariffs immediately.

U.S. auto manufacturers had been blocked from access to the Korean market due to environmental regulations and excessive tariffs.

The changes have won the support of the Ford Motor Company and the United Autoworkers, both of whom were involved in the negotiations. Other unions, such as AFL-CIO, IBEW, Teamsters, RCALF, and the United Steelworkers (USW), oppose the deal, arguing that it will reduce U.S. jobs.

“After thorough review, the USW Executive Board views the agreement as falling far short of what is necessary to ensure that U.S. workers and businesses have a fair deal,” the USW said in a statement.

The USW represents workers in a broad range of industries, including auto parts, petroleum products, tires, iron, and steel.

Public Citizen, a national citizens watchdog, argued in testimony before the House Ways and Means Committee that the FTAs in question would result in a net negative for the economy, jobs, reining in Wall Street abuses, and the environment. Director Lori Wallach argued that the Obama administration has done nothing to improve the “failed NAFTA-style trade policies of the past.”

Wallach and others have criticized Obama for failing to craft a new and comprehensive approach to trade, as he had promised during his presidential campaign.

While some improvements are evident in the recent negotiations, and Korea in particular has been hailed as the most comprehensive agreement in U.S. history, a variety of opinions remain as to the right approach in a post-crisis economy.

“U.S. trade policy has to evolve to meet much more the current conditions. Right now we just don’t have a really good consensus of the role of trade to our economy,” said Krist.


The White House has said that the agreement will increase exports of American goods by $11 billion and will boost American jobs by 70,000, but actual studies refute this.

Studies conducted by the United States International Trade Commission, and the Economic Policy Institute (EPI) on the net impact of the deal to the U.S. economy found the net change in trade and in job creation to be negligible, but leaning toward a negative impact.

Despite some opposition, KORUS appears to have general support from Congress and from the business community, with the latter pressing the administration hard to get the job done. Republicans have asked for all three FTAs before they will consider passing Korea.

During her Korean trip, Secretary Clinton sought to reassure the Koreans that the United States is serious about completing KORUS. Congress must ratify and agree to all of the provisions before it can start taking affect.

The administration appears to be making progress on clearing the obstacles to passage of all three agreements. They are expected to ask Congress to act on them within the next few weeks.

Earlier this April, an important milestone related to labor rights was reached with Colombian Ambassador Gabriel Silva. This paves the way for general acceptance of this agreement.

On Tuesday, United States Trade Ambassador Ron Kirk sent a letter to the chairmen and ranking members of the Senate Committee on Finance and the House Committee on Ways and Means with the details of provisions they were awaiting on the Panama deal.