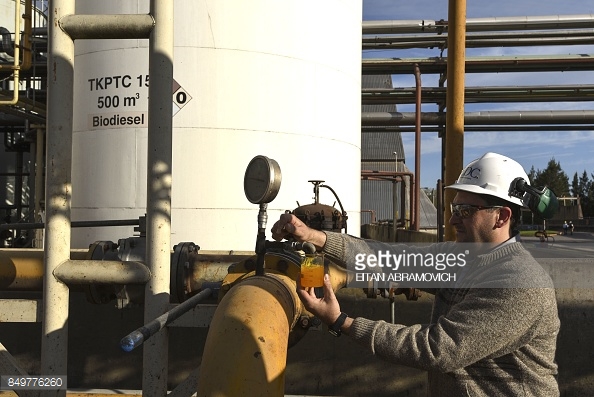 An engineer takes a sample of biodiesel from a storage tank at the industrial complex of the Louis Dreyfus Company in General Lagos, Santa Fe province, Argentina on Sep. 13, 2017. (Photo credit should read EITAN ABRAMOVICH/AFP/Getty Images)
US

US Locks in Anti-Dumping Duties on Biodiesel From Argentina, Indonesia

The U.S. International Trade Commission said on April 3 that the dumping of biodiesel imports from Argentina and Indonesia harms American producers, a move that locks in place duties on the imports.

The commission’s final phase determination followed a Commerce Department move in February to add anti-dumping duties of 60.44 percent to 276.65 percent to already steep anti-subsidy duties on imported biodiesel from Argentina and Indonesia.

The independent panel had already found in the subsidy cases that the imports caused such injuries.

The latest duties make it virtually certain that biodiesel from Argentina and Indonesia will not be sold in the U.S. market, with combined rates of up to 159 percent on the Argentine fuel and up to 341 percent on Indonesian variety.

The trade case was filed by the National Biodiesel Board and 15 member companies that alleged a flood of subsidized imports sold below fair market value was preventing U.S. producers from earning an adequate return.

The vote marked the last procedural hurdle before final antidumping orders can be issued this month, the board said in a statement.

“This vote today finalizes the case to address the harm that unfair trade practices have had on the U.S. biodiesel industry,” said Donnell Rehagen, the board’s chief executive officer. “Foreign producers dumping product into American markets below cost has undermined the jobs and environmental benefits that U.S. biodiesel brings to the table.”