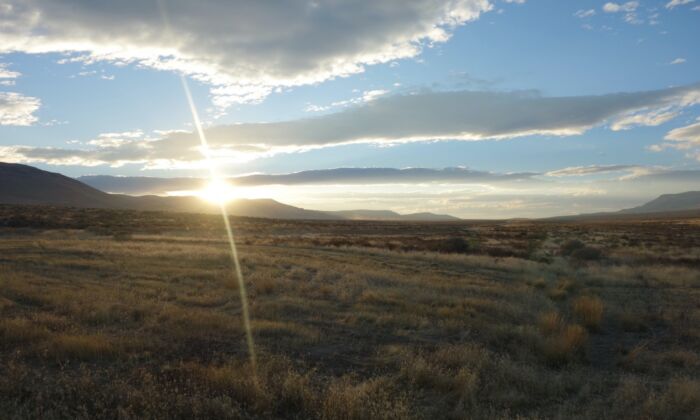 Thacker Pass is the largest known lithium resource in the United States. (Lithium Americas)
US News

US Lithium Mine Set to Destroy the Environment, Cultural Heritage Site, and Displace Farmers: Watchdog Group

Located within an extinct supervolcano, the Thacker Pass lithium deposit is the largest known lithium resource in the United States. And once Lithium Nevada gets its open-pit mine up and running, it’s expected to net billions in revenue and millions in tax generation.

It will also destroy Peehee Mu’huh, a sacred site for the Fort McDermitt Tribe, devastate the local environment, and displace farmers and ranchers in the area, John Hadder, the director of Great Basin Resource Watch (GBRW), a mining watchdog group, told The Epoch Times.

Despite that, earlier this year, permits for the Thacker Pass Lithium Mine project were approved on an expedited schedule.

Exact estimates vary, but it’s generally agreed that the electric vehicle (EV) market will be worth trillions soon. And because most EVs rely on lithium-ion batteries, mining this element is lucrative, to say the least—some estimates put the value at $94.4 billion by 2025.

However, right now, the United States is heavily dependent on China for minerals, something the Biden administration admitted was an economic and national security threat.

In December 2020, LNC released its Final Environmental Impact Statement (EIS) to the Bureau of Land Management (BLM), which stated that Lithium Nevada plans to “construct and operate an open-pit lithium mine.”

Some of the effects found by the EIS include contaminating the groundwater with higher-than-accepted levels of antimony, arsenic, sulfate, and total dissolved solids (TDS), the destruction of 5,695 acres, and a 10-foot drawdown of the water table. Hadder pointed out these estimates are conservative as the analysis was from the mining contractor.

Of further note, the EIS disclosed the mine would desecrate 52 historic or prehistoric sites but, as a positive, would generate over $8.2 million in taxes in Phase I (construction and initial operation) and in Phase II (full operation), almost $9.2 million in tax generation.

Following the EIS, the Nevada Environmental Protection Agency (NEPA) fast-tracked LNC’s Thacker Pass permits. That was despite heavy pushback from the community and Native American tribes in the area, something Hadder claims is abnormal.

“The federal NEPA process was completed in less than a year. Normally, the NEPA process is on the order of 3-5 years if all is well and there are few to no public concerns,” Hadder said.

“Mining operations are very destructive to the environment and disruptive to nearby communities, so the process of allowing mining must be done carefully and judiciously with rigorous analysis of environmental effects and mitigation approaches.”

Endeavoring to protect their land and resist LNC’s development, north Nevada ranchers and organizations like GBRW filed lawsuits, alleging that both the BLM and LNC had expedited approval processes, ignored the environmental impact, and violated the plaintiff’s rights.

In Bartell v. Ester M. McCullough/Bureau of Land Management, plaintiff Edward Bartell pointed out that his ranch was the holder of several federal grazing permits and had private ranch lands and water rights that the lithium mine threatened.

“The mine could affect their ability to farm and ranch in the area. The air quality will decrease and there will be continual truck traffic hauling materials to and from the mine, and increased water scarcity is likely. There is a distinct possibility that these farmers and ranchers will eventually sell their properties to the mine, and family farming will end in the region,” Hadder confirmed.

“In the rush to implement the Project, Defendants violated federal environmental statutes and swept under the rug the mine’s serious environmental impacts.”

Pointedly, Hadder asserted, “Lithium mining is not the save-all climate solution it is being touted as. Mining … is a driver of climate change. …  There is more to climate change than solely carbon emissions. It is land-use change, biodiversity loss, and loss of the system to repair itself under stress.

“Mining exacerbates all of these other aspects of climate change while also taking away large swaths of healthy environments functioning as carbon sinks. Many of these mine sites will never be recovered and sit as a toxic legacy of the mining industry on the landscape,” Hadder said.

In an interesting twist, LNC’s plan to operate an open-pit mine means the Thacker Pass project will use the same mining techniques as coal deposits. It’ll also generate 132,588 tons per year in greenhouse gas emissions during Phase II. For comparison, a typical passenger vehicle emits about 4.6 metric tons of carbon dioxide per year, according to the Environmental Protection Agency.

That requirement, which is also alluded to in the EIS, will have a significant environmental impact, Hadder claims.

“The sulfuric acid plant will be a source of air pollution—particulate, nitrogen oxides, sulfur dioxide, and hydrogen sulfide along with the usual volatile organic compounds. Once the ore is leached, and the lithium is extracted, what remains is tailings that will be acidic and a potential source of water pollution for an undetermined period of time—potentially one hundred years or more.”

The water would come from the Quinn-Production well in Orovada Subarea Hydrographic Basin which, Hadder pointed out to The Epoch Times and the Nevada Division of Environmental Protection, is already overallocated by 30,271 acre-feet per year.

The environmental impact is one element worth considering with Thacker Pass, but it’s not the only one.

On June 16, The National Congress of American Indians (NCAI), the oldest and largest national organization of American Indian and Alaska Native tribal governments, adopted a resolution entitled “Supporting Indigenous Safety through Opposing Man-Camps for Thacker Pass,” which details one of the reasons they oppose the Thacker Pass mine.

Since time immemorial, the Paiute and Shoshone people have cared for, cultivated, and lived in Peehee Mu’huh. But, in 1865, while the hunters were away, a group of U.S. cavalry descended on the unprotected women, children, and elders.

When the hunters returned, “they could smell something rotting. They soon came upon a massacre, their elders, women, and children laying in the old sagebrush with their insides dragged across the landscape in the section of the pass shaped like a crescent when looking from the east. It’s how the area earned its Indigenous name: Peehee Mu’huh or ‘rotten moon,’” explains Daranda Hinkey, a Fort McDermitt Paiute Shoshone tribal member.

Furthermore, the reason for the massacre, according to oral tradition and NCAI, is that the United States wanted the natural resources in the area.

Since the massacre, the people of the Paiute and Shoshone tribes have viewed Peehee Mu’huh as a sacred burial and spiritual site and have honored it with ceremonies.

In an official statement of opposition to the mine, the People of Red Mountain, a group of Native Americans formed to protect their ancestral land, stated, “To build a lithium mine over this massacre site in Peehee Mu’huh would be like building a lithium mine over Pearl Harbor or Arlington National Cemetery.”

So far, legal efforts and resolutions have failed to stop LCN’s lithium mine from moving forward with its plan to destroy Peehee Mu’huh.