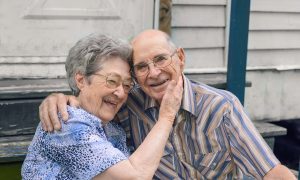 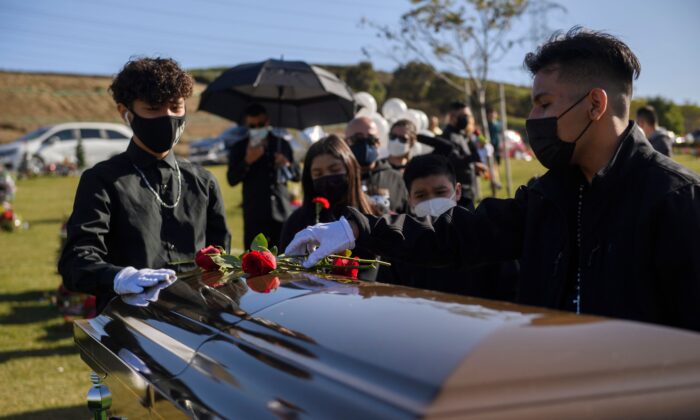 Gilberto Arias, 15, (R) and Javier Dominguez, 13, place flowers on the casket of Gilberto Arreguin Camacho, 58, who died due to COVID-19, during his burial service at a cemetery in Whittier, Calif., on Dec. 31, 2020. (Patrick T. Fallon/AFP via Getty Images)

Life expectancy in the United States dropped by a year and a half in 2020 from a year earlier, government researchers said on July 20.

The decrease of life expectancy to 77.3 years from 78.8 years was largely attributed to the COVID-19 pandemic, which has devastated America and many other countries.

“The decline in life expectancy between 2019 and 2020 can primarily be attributed to deaths from the pandemic. COVID deaths accounted for nearly 75 percent of the decline. More than 609,000 Americans have died in the pandemic so far, roughly 375,000 of those lives were lost last year,” the Centers for Disease Control and Prevention (CDC) said in a statement.

COVID-19 is the disease caused by the CCP (Chinese Communist Party) virus. Cases of the illness first appeared in China in late 2019 and in the United States early last year.

The report detailing the statistics (pdf) came from the CDC’s National Center for Health Statistics. Researchers used death certificates received and processed by the center, as well as birth records and population estimates.

A rise in unintentional injuries, murder, diabetes, chronic liver disease, and cirrhosis were named as other contributors to the life expectancy decline, which was more pronounced than a provisional estimate of the first six months of 2020.

According to the new, full-year provisional estimate, life expectancy for males has declined nearly two years to 74.5 years while females saw a decline of 1.2 years to 80.2 years.

The male life expectancy dropped to a level not seen since 2003; the female level is the lowest since 2005.

“Life expectancy has been increasing gradually every year for the past several decades,” Elizabeth Arias, a CDC researcher who co-authored the report, told Reuters. “The decline between 2019 and 2020 was so large that it took us back to the levels we were in 2003. Sort of like we lost a decade.”

Other countries also saw life expectancy driven down by the COVID-19 pandemic.

Life expectancy in Brazil dropped by 1.3 years in 2020, according to a study published in Nature last month. Officials in Belgium said last week that life expectancy declined by a year in 2020.

At the same time, the number of Americans vaccinated against the CCP virus has continued to increase. But officials are warning about the Delta virus variant, especially as the number of cases jumps across the nation.

The Johnson & Johnson vaccine, though, is significantly less effective against some variants, including the Delta strain, a new study suggests. Additionally, some researchers have noted the growing body of evidence showing people who recover from COVID-19 enjoy immunity from the disease.

“They are at very low risk for repeat infection,” Dr. Jeffrey Klausner, clinical professor of preventive medicine and medicine at the University of Southern California’s Keck School of Medicine, told The Epoch Times in a recent interview.

“Some experts, including myself, believe that protection is equal to vaccination.”