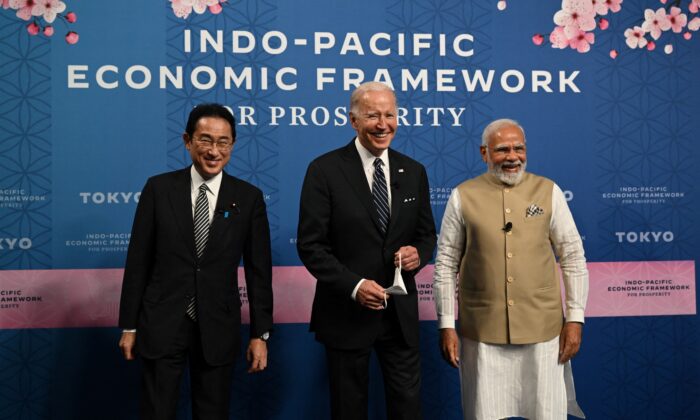 President Joe Biden announced the Indo-Pacific Economic Framework (IPEF) for “expanding U.S. economic leadership” in the Indo-Pacific on May 23 in Tokyo with a dozen others including the Quad partners, Japan, Australia, and India, that have traditionally kept out of China’s Belt and Road Initiative—the regime’s trillion-dollar infrastructure investment program aimed at bolstering Beijing’s global economic and political clout.

“IPEF will strengthen our ties in this critical region to define the coming decades for technological innovation and the global economy,” the White House said in a statement on the day of the announcement.

The “critical” Indo-Pacific region comprises 38 countries containing 4.3 billion people or 65 percent of world’s total population, accounts for 63 percent of the world’s GDP, and over 50 percent of the world’s maritime trade happens through the region. The U.S. foreign direct investment in the region totaled more than $969 billion in 2020 with the country emerging as the leading exporter of services to the region, according to the White House.

Experts told The Epoch Times that money propels geopolitical assertiveness and IPEF could have greater significance in the region where China has strengthened its economic ties and strategic architecture in the last few decades and has developed partnerships for its Belt and Road Initiative (BRI).

“The IPEF has been launched by the U.S. with a focus on multipolar politics which is critical to the Asian geopolitical landscape. The inclusion of a diverse group of 12 countries … shows that the goal is to promote decoupling from China across the Indo-Pacific region,” Jagannath P. Panda, head of the Stockholm Center for South Asian and Indo-Pacific Affairs at the Sweden-based Institute for Security & Development Policy, told The Epoch Times in an email.

The Biden administration through the IPEF is thus attempting to build economic clout in the Indo-Pacific along with its military and political presence, according to Panda.

Within the Indo-Pacific region, 25 East Asian and Pacific countries, and six Southeast Asian countries have signed for China’s BRI.

CSIS experts, Matthew P. Goodman and William Alan Reinsch, said in a January report that IPEF will allow the United States to operationalize the Build Back Better World (B3W) program in the Indo-Pacific.

B3W is the United States’ alternative to China’s BRI, and was endorsed by G7 nations in June last year.

“In light of the massive need for infrastructure in the Indo-Pacific region—as much as $26 trillion between 2016 and 2030, according to the Asian Development Bank—and the challenges posed by China’s Belt & Road Initiative (BRI), the Biden administration is right to make this an element of the IPEF,” said Goodman and Reinsch.

Grant Newsham, a director at One Korea Network and a senior fellow with the Center for Security Policy, however is critical of the IPEF, saying it means “very little” for the U.S. foreign policy.

“At most it shows the Biden administration is paying attention to the Indo-Pacific. But in practical terms it is unclear what the benefits are for anyone who signs up for IPEF,” Newsham told The Epoch Times in an email.

“Maybe there’s some benefit to U.S. foreign policy by getting together and talking to other countries about things IPEF related. But that’s not much. All in all, it makes the Americans look kind of befuddled,” said Newsham.

Taiwan was excluded from the IPEF, but Washington and Taipei on June 1 announced a new trade initiative which could pave the way to a future free trade agreement. Newsham described this development as “more significant” and potentially more “beneficial to U.S. foreign policy.”

Though IPEF has a clear agenda of challenging China’s ambitions, in its current design it’s not yet clear if it’ll be able to practically counter China’s Belt and Road Initiative, according to experts.

“Classifying IPEF as a counter to BRI—especially when it is in its initial stages with unclear funding definitions—would not make sense. Essentially, the venture represents a combination of ‘like-minded’ countries from both East and West and remains committed to the Quad’s main goal of maintaining a rules-based liberal order,” said Panda.

The IPEF is important because the current economic system in the Indo-Pacific is dependent on China and it is money that’s enabling Beijing’s current military assertiveness, according to Satoru Nagao, a non-resident fellow at the Washington-based Hudson Institute.

“Many global companies built their factories in China. Many companies are selling their products within China. Thus, the economic structure itself needs to change. The U.S. and its allies and like-minded countries should relocate their factories and find new markets elsewhere,” said Nagao.

Newsham, also a former U.S. diplomat and business executive with years of experience in the Asia-Pacific region, said that if IPEF was designed to counter BRI, it’ll not be an effective one.

He added that IPEF will not deter China from doing what it has been doing in the Indo-Pacific for the past three decades. It may instead help the Chinese to identify and target local politicians who signed for the IPEF with the Americans.

Ten Pacific Island nations (PICs) in late May rejected China’s proposal for a broad regional security and economic deal as a result of a lack of consensus. Experts said the IPEF may have played some role in dissuading the PICs from the Chinese regime’s pact that would have directly countered U.S. security architecture in the region.

Fiji, which had been eager to join various China-led projects in the past, joined IPEF. Fiji, including 10 other PICs, have already signed onto BRI. Nagao described Fiji joining IPEC as an “interesting move.”

“Fiji’s move shows that the South Pacific nations are rethinking their cooperation with China now,” he said.

After the Solomon Islands signed a controversial security pact with China, the United States and allies in the region tried to persuade other South Pacific islands to distance themselves from cooperating on security with the regime, an approach that seems to be showing success, according to Nagao.

Newsham however doubted that IPEF had any role to play in PICs decision to not sign for China’s regional security pact as he believes most of the leaders in these nations understand Beijing’s agendas in the region except for the very corrupt ones.

“The leaders who said ‘no’ don’t need IPEF to remind them of the Chinese threat. And IPEF doesn’t really help them. Maybe it helps to see the Americans showing interest in the region, and this might have given the leaders some encouragement and a little more confidence to turn down the Chinese offer,” said Newsham.