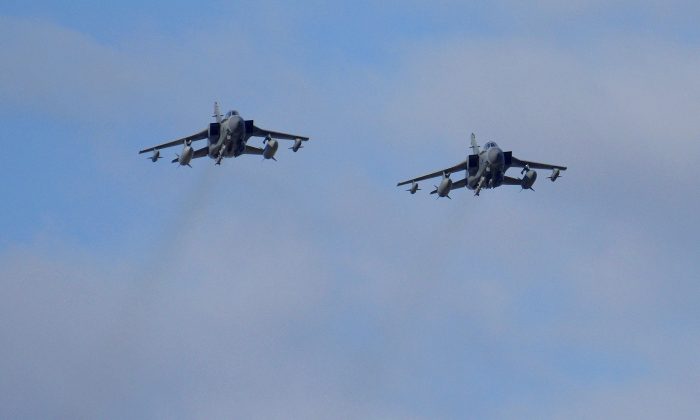 Two British Tornados warplanes fly over the RAF Akrotiri, a British air base near costal city of Limassol, Cyprus, Thursday, Dec. 3, 2015, as they arrive from an airstrike against Islamic State group targets in Syria. (AP Photo/Pavlos Vrionides)
International

LONDON—British Tornado jets struck oil fields in eastern Syria on Thursday that help finance the Islamic State (ISIS) and Germany prepared to send reconnaissance aircraft to the Middle East as coalition forces stepped up efforts to fight the militants.

The strikes at the Omar oil field came hours after Britain’s Parliament authorized military action in Syria against the extremists. Although several of the oil fields have already been hit by the U.S.-led coalition, Britain chose a target with low risk of collateral damage for its first strike in Syria.

“This strikes a very real blow at the oil and the revenue on which the Daesh terrorists depend,” Defense Secretary Michael Fallon told the BBC, using the Arabic acronym for ISIS.

Russian President Vladimir Putin, meanwhile, called for “one powerful fist” in the global fight against ISIS, following the downing of a Russian jetliner over Egypt and last month’s attacks in Paris, both claimed by the extremist group.

Speaking in his state-of-the-nation address, Putin accused Washington and its allies of turning Iraq, Syria and Libya into a “zone of chaos and anarchy threatening the entire world” by supporting change of regimes in those countries.

“We must leave all arguments and disagreements behind and make one powerful fist, a single anti-terror front, which would work on the basis of international law under the aegis of the United Nations,” Putin said, addressing lawmakers and top officials gathered in an ornate Kremlin hall.

The efforts to forge unity gained momentum as Fallon confirmed that eight more jets were on their way to Britain’s base in Cyprus to join the attacks and warned that military action against ISIS could continue for years, not months.

Other allies also moved to get equipment into place. Germany’s government said it planned to send up to six Tornado reconnaissance planes, tanker aircraft and a frigate to help protect the French aircraft carrier Charles de Gaulle in the eastern Mediterranean, but won’t actively engage in combat.

In all, up to 1,200 German soldiers would be deployed to support the international coalition fighting ISIS. Two Tornados and a tanker could be sent to Turkey’s Incirlik air base next week if the German Parliament approves the mission Friday as expected.

The bulk of German troops and planes likely won’t arrive in the region until next month.

“The goal… is to fight and contain ISIS, and destroy their safe havens and their ability to lead worldwide terror operations,” she told reporters in Berlin before heading to Ankara for talks with her Turkish counterpart.

France welcomed the first British airstrikes in Syria, saying they are a sign of the European solidarity promised after the deadly Nov. 13 attacks on Paris claimed by ISIS militants.

In a statement Thursday, French President Francois Hollande said the British Parliament’s approval of the airstrikes and the upcoming German vote were a sign that Europeans would stand together after the ISIS attacks that killed 130 people and left hundreds wounded in Paris.

French fighter jets joined the U.S.-led coalition against ISIS extremists in Iraq in 2014 and expanded their mission to ISIS targets in Syria in September.

Other European officials also appealed for a joint global response. Diplomats at an Organization for Security and Cooperation in Europe conference in Belgrade said Thursday that only a unified front could be effective in countering the threat of terrorism.

German Foreign Minister Frank Walter Steinmeier described the situation as “too dangerous, and freedom and stability too fragile, for us to counter each other”—an apparent reference to the spat caused by the downing of a Russian plane by Turkey. Foreign ministers from the two countries were to meet in Belgrade later Thursday for the first time since the incident.

“We know who in Turkey are filling their pockets and allowing terrorists to earn money by selling oil stolen from Syria,” Putin said in his state of the union address.

“For that money the bandits are recruiting mercenaries, buying weapons and staging cruel terror attacks aimed against our citizens, as well as citizens of France, Lebanon, Mali and other countries,” he said.

Russian troops have moved to fortify their positions in Syria expanding a military base, adding fortifications and developing its runways in a sign they intend to use it as their second air base in the country, Syrian activists said Thursday.

The work underway at the Shaayrat air base, about 40 kilometers (25 miles) southeast of the city of Homs, could also signal Moscow’s intention to step up airstrikes in the country’s central region where ISIS is active.