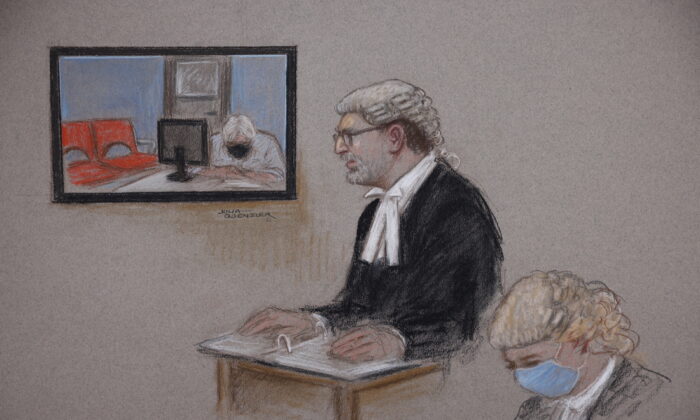 In a courtroom sketch, Wikileaks founder Julian Assange appears via video link from Belmarsh Prison for his extradition hearing in London on Oct. 27, 2021. (Julia Quenzler/Handout via Reuters)
UK

US Lawyers Say Assange Can Safely Be Extradited; Assange Lawyer Dismisses US Promises

LONDON—Lawyers for the United States launched a fresh attempt on Oct. 27 to have Julian Assange extradited from Britain, arguing that concerns about the WikiLeaks founder’s mental health should not prevent him from facing U.S. justice; the U.S. government also promised that Assange would not be subjected to harsh prison conditions if he is extradited.

The 50-year-old Australian is wanted in the United States on 18 criminal charges, including breaking a spying law, after WikiLeaks published thousands of secret U.S. files and diplomatic cables in 2010.

The United States is appealing against a Jan. 4 ruling by a London District Judge that Assange should not be extradited because he would likely commit suicide in a U.S. prison.

Lawyer James Lewis told the court the United States had addressed the District Judge’s concerns by making assurances to Britain regarding how Assange would be treated if extradited.

These included that he would not be subject to a set of strict detention conditions known as Special Administrative Measures and would not be detained at a maximum security penitentiary in Florence, Colorado, known as ADX.

The U.S. authorities had also assured Britain that they would consent to Assange serving in Australia any custodial sentence imposed by a U.S. court, Lewis said.

Assange, who denies any wrongdoing, is being held at Belmarsh Prison. In the morning, the court was told he felt too unwell to appear via video link, but later in the day he did appear on the screen wearing a shirt, tie, and mask. He was sitting at a table, holding his head in his hand.

Assange’s lawyer, Edward Fitzgerald, said on Oct. 28 during the two-day hearing at Britain’s High Court that the Australian was too mentally ill to be extradited to the United States to face trial on espionage charges.

Fitzgerald argued that the U.S. assurances were all “caveated, vague, or simply ineffective.” They do not remove the risk of Assange being detained in extreme isolation in the United States in the long term, he said, and the risk of Assange killing himself remained substantial if he is extradited.

“It is perfectly reasonable to find it oppressive to extradite a mentally disordered person because his extradition is likely to result in his death,” he said. He added that judges should use their power to “protect people from extradition to a foreign state where we have no control over what will be done to them.”

The two-day hearing before two judges, including England’s most senior judge Lord Chief Justice Ian Burnett, ends Oct. 28, but a ruling is not expected for weeks. The losing side could seek to appeal to the UK Supreme Court.