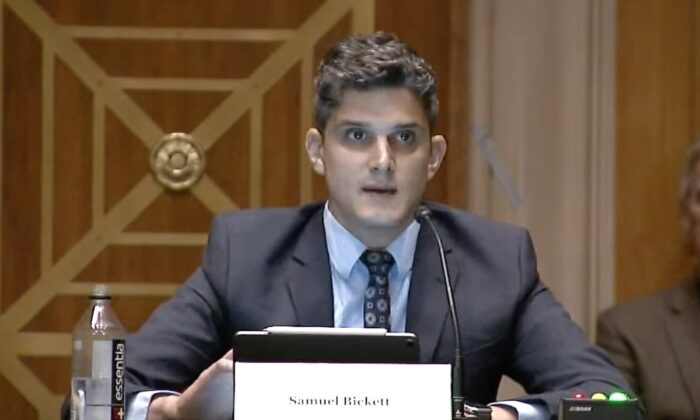 Samuel Bickett appeared before the U.S. Congressional-Executive Committee on China, in Washington, on July 12. (Screenshot of YouTube/CECC via The Epoch Times)
HK Current Affairs

Samuel Phillip Bickett, an American lawyer who was accused of “assaulting a police officer” during the anti-extradition law amendment bill movement in Hong Kong in 2019 and sentenced to four and a half months in prison, testified at the hearing on Hong Kong of Congressional-Executive Committee on China (CECC) on July 12. He explained the deterioration of Hong Kong’s judicial system in general and, through his case, urged the U.S government to sanction mid-level police officials and prosecutors in Hong Kong.

“The Dismantling of Hong Kong’s Civil Society” was the topic of the hearing. Bickett said that Hong Kong’s judicial system has been corrupted by Beijing’s authoritarianism and no longer operates independently. He said, “high profile political defendants wrongly charged in common law courts with crimes like unlawful assembly, riot, and incitement face almost as little hope as national security law defendants. He pointed out that when people focus on the discussion of the “Hong Kong National Security Law,” relatively little is said about the collapse of common law in Hong Kong, and most of the protesters are accused of crimes in the scope of common law.

He also mentioned that the traditional common law in Hong Kong had been twisted to fulfill the needs of Beijing.

Nowadays, many judges in Hong Kong participate in destroying the rule of law. Such as, defendants were often convicted as they did not sufficiently prove their innocence, and the judges omitted and distorted the defendants’ statements.

Bickett mentioned that he was detained and questioned in a room by the Hong Kong Police Force, where the temperature was only around 35 degrees Fahrenheit (two degrees Celsius).

He also revealed that the first prosecutor handling his case told him that the police had pressured her superior in the Department of Justice to proceed with his case because he was a foreigner who “embarrassed the police” on camera.

Later the prosecutor was replaced, and a new one took up his case.

He called on the American government to sanction Hong Kong’s mid-level police officials and prosecutors and provide immigration pathways to America for residents who wish to flee from Hong Kong.

Bickett was accused of attacking off-duty policeman Yu Shu-sang at the Causeway Bay MTR (Mass Transit Railway) station on December 7, during the 2019 Hong Kong protest. At that time, Yu denied that he was a police officer, but Bickett was still convicted of assaulting a police officer and sentenced to four and a half months in prison.

His later appeal was also dismissed, and he was sent to jail to serve an immediate sentence.

On the day of the case, a teenager was suspected of jumping over the turnstile at Causeway Bay MTR Station. Yu, an off-duty marine police officer, chased after him and tried to subdue the young man with a baton.

When the case was presented in court, the prosecution alleged that Bickett took away his baton, stood on Yu’s chest with his feet, and hit Yu’s left cheek several times with his fist.

Bickett explained that at that time, he saw the young man being held with a baton to the neck by the off-duty policeman, and he seemed to be choked.

When Bickett asked Yu twice, “Are you Popo (police officer)?” Yu answered “No” for the first time and then changed his answer to “Yes.”

Bickett said that he only intervened after Yu had denied that he was a police officer.

Magistrate Arthur Lam Hei-wei accepted Yu’s testimony that Bickett had already held Yu, and there was no need for Bickett to punch him. He did not accept Bickett’s behavior as an act of self-defense.

Lam also ruled that Yu had identified himself as a police officer and that Bickett’s behavior was an intentional assault on the police and resulted in multiple injuries to the officer, which was a severe attack. The starting point of sentencing is four months.

In addition, the magistrate believed that as the case location was crowded it would increase the risk of violence, so two weeks were added to the punishment.

Bickett was convicted of assaulting a police officer at the end of June 2021 and sentenced to four and a half months in prison in July 2021.

Deported After Jail and Banned to Hong Kong

Bickett then appealed his conviction and sentence to the High Court in August 2021 and was released on bail pending appeal by the High Court. Bickett explained to the High Court that at the time of the incident, he saw the off-duty police officer hitting someone using a baton. He felt it was very dangerous, so he tried to intervene and mediate, hoping to protect himself and others.

But the High Court Judge Esther Toh Lye-ping retorted, “It’s a baton, not a gun.”

Regarding the sentence, the Judge agreed with the magistrate that the location of the incident was a busy MTR station, and crowds were gathering. To prevent the baton from being snatched, the officer finally fell, and he was assaulted on his abdomen by the appellant. Therefore, the four months starting point for sentencing was not too harsh, and an additional two-week sentence was also appropriate. As a result, the appeal for the conviction was denied, and Bickett had to continue serving his sentence.

Bickett left Stanley Prison after completing his sentence in March 2022. He pointed out that he was deported immediately from the prison to Washington and banned from returning to Hong Kong. He said the Immigration Department of Hong Kong refused his request to give him a few days to deal with his matters, making it impossible to say goodbye to his partners and loved ones in Hong Kong.

The authorities sent him directly from the prison to the Immigration Detention Centre and escorted him out of Hong Kong.

When he arrived in Istanbul for transit, Turkish officials refused to return his passport, saying they followed a “routine request” by the Hong Kong government. Bickett was stranded at the airport for eight hours.

After being deported, he appealed his conviction to the Court of Final Appeal in April 2022. He said in a statement that people may wonder why he still appealed even though he had already served his sentence, was deported by the authorities, and Hong Kong’s judicial system had fallen.

He explained that as a lawyer and advocate for the rule of law, he had decided to do everything possible to hold those who have done him injustice accountable.

If the Court hears the case, it will be the first time the Court of Final Appeal directly deals with a hearing on the police using excessive force during the 2019 social movement in Hong Kong.

Bickett worked as a criminal defense lawyer in the United States. He came to Hong Kong in 2013 and then moved to Taiwan. In 2019, he transferred to Bank of America Merrill Lynch in Hong Kong as a lawyer in the compliance department and was suspended due to the case in April 2020.