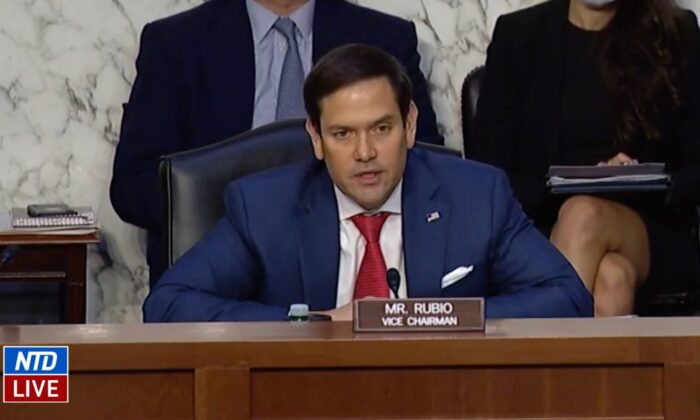 Lawmakers from the United States and Europe are shrugging off Kyiv’s call for imposing a no-fly zone over Ukraine, saying that such a move could trigger another disastrous global war.

A no-fly zone refers to airspace where certain aircraft aren’t allowed to enter to prevent surveillance or attacks. Imposing this directive over Ukraine would mean that any banned aircraft flying overhead would be shot down.

“Close the sky over Ukraine,” Ukrainian President Volodymyr Zelensky demanded in a video uploaded to Twitter on March 6, as Kyiv fights off a Russian invasion.

Ukrainian Ambassador to the U.S. Oksana Markarova reiterated her country’s request, pointing out that Russia had attacked Kyiv unprovoked and Moscow could end up attacking anyone. However, Sen. Marco Rubio (R-Fla.) said instituting a no-fly zone is far more dangerous than most people realize.

“No-fly zone has become a catchphrase. I’m not sure a lot of people fully understand what that means,” Rubio told ABC News.

“That means the willingness to shoot down and engage Russian airplanes in the sky. That means, frankly, you can’t put those planes up there unless you are willing to knock out the anti-aircraft systems that the Russians have deployed, not just in Ukraine, but in Russia and also in Belarus. So, basically a no-fly zone … means World War III.”

Sens. Chris Murphy (D-Conn.) and Joni Ernst (R-Iowa) agreed that Zelensky was right in asking for a no-fly zone, since he’s the president of Ukraine. However, they both made it clear that the United States should take no action that would bring itself into a direct military confrontation with Russia. Ernst pushed for aiding Ukraine by providing the country with defensive mechanisms.

A recent Reuters/Ipsos poll has shown that a majority of U.S. citizens supported the idea of Washington working with NATO to establish no-fly zones to protect Ukraine from airstrikes by Russia. Roughly 74 percent of respondents agreed to such an action, while 80 percent wanted the United States to stop buying Russian oil.

The Biden administration has stated that it won’t be imposing a no-fly zone. The UK has also affirmed that it’s against a no-fly zone, with Defense Secretary Ben Wallace making it clear that London’s support for such a move would trigger a “war across Europe.”

NATO Secretary-General Jens Stoltenberg has denied Ukraine’s request for a no-fly zone as well, insisting that the organization is “not part” of the Ukraine–Russia conflict.

“We have a responsibility as NATO allies to prevent this war from escalating beyond Ukraine because that would be even more dangerous, more devastating, and would cause even more human suffering,” Stoltenberg said after a NATO meeting in Brussels.