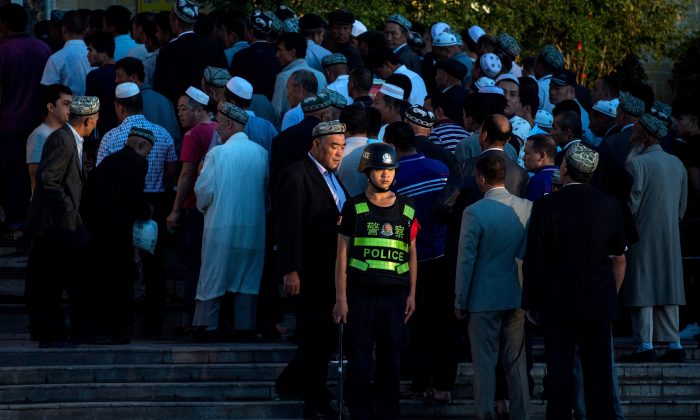 A policeman standing guard as Muslims arrive for the Eid al-Fitr morning prayer at the Id Kah Mosque in Kashgar in Xinjiang, China, on June 26, 2017. (Johannes Eisele/AFP/Getty Images)
US-China Relations

U.S. lawmakers renewed calls for the administration to sanction officials overseeing human rights abuses against Uyghurs and other Muslim minorities in the region of Xinjiang in China.

Representative Jim McGovern (D-MA) and Senator Marco Rubio (R-FL) on July 5 issued a statement urging the U.S. government to “urgently address what is one of the world’s worst human rights situations.”

In recent years, the Chinese regime has detained an estimated more than 1 million Uyghurs and other Muslim minorities in internment camps, according to the U.S. State Department and experts. Beyond the camps, the region has effectively been rendered a police state with its 11 million Turkic-speaking Muslims subject to a system of mass surveillance and control.

“On this sad anniversary, we reiterate that call to hold Chinese officials accountable. The Chinese government has operated with impunity in [Xinjiang] for far too long,” said the statement from the Congressional-Executive Commission on China (CECC). McGovern and Rubio are the chair and co-chair of the commission.

“The United States must demonstrate moral leadership, and the international community must respond.”

The statement added that the atrocities in Xinjiang may constitute crimes against humanity.

In addition, the two legislators noted that they have yet to receive a response to a bipartisan letter from 43 lawmakers sent to President Donald Trump’s top advisors in April calling for punitive measures against communist officials and companies complicit in human rights violations in the region.

The letter asked the U.S. government to impose sanctions under the Global Magnitsky Act against the communist official overseeing the region, Chen Quanguo.

The letter also condemned surveillance camera manufacturers Hikvision and Dahua Technology for being “complicit in human rights abuses,” and called for tighter U.S. export controls over such Chinese companies. The two companies produce equipment which is used in Xinjiang’s mass surveillance network.

U.S. officials have repeatedly called attention to the widespread surveillance and mass detention in the western Xinjiang region.

Under the pretext of combating “extremism,” the Chinese regime has launched an expansive crackdown on the Uyghurs and other Muslim minorities in the region.

Inside the region’s network of internment camps dubbed “vocational training centers”, Uyghurs and other Muslim minority detainees are forced to undergo political indoctrination and denounce their faith. Former detainees have reported cases of torture, forced medication, and rape.

A recent BBC investigation found that the local authorities have been separating Muslim minority children from their families, and placing them into boarding schools to sever the minors’ ties the their cultural roots.

The report cited a case in April 2018, when 2,000 children from several villages surrounding Yecheng County were relocated into a large, centralized boarding school in the area.

Many of the boarding schools have extensive surveillance systems and electric fences, according to the report.

Liu Xiaoming, Chinese Ambassador to the U.K., in an interview with the BBC on July 7 denied these allegations.

Dilxat Raxit, a spokesperson for the German-based advocacy group World Uyghur Congress, told the Chinese-language edition of The Epoch Times that Chinese authorities have gone to great lengths to cover up the abuses carried out in Xinjiang.

“What the Chinese communist government fears the most is to have their lies exposed,” he said.

Last year, U.S. lawmakers introduced bills in both the Senate and the House of Representatives  which called for a new “special coordinator” of U.S. policy on the issue, sanctions on Chinese officials responsible for the crackdown, and consideration of a ban on the export of U.S. technology that could be used by Beijing in the surveillance and mass detention of ethnic Uyghurs in the region.