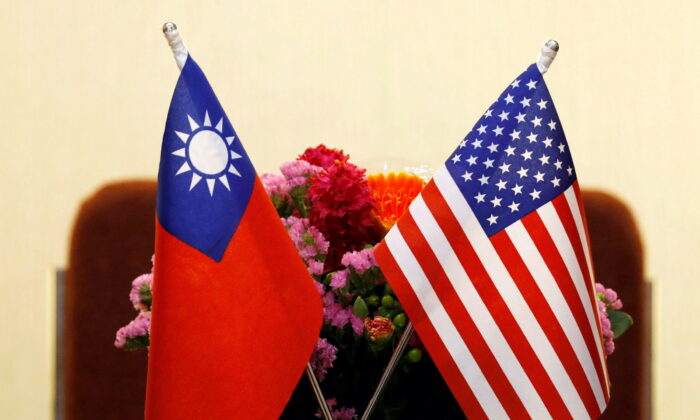 Flags of Taiwan and U.S. are placed for a meeting in Taipei, Taiwan, on March 27, 2018. (Tyrone Siu/Reuters)
US-China Relations

WASHINGTON—A bipartisan group of U.S. lawmakers proposed matching bills in the Senate and House of Representatives on Thursday that would require the United States to negotiate the renaming of Taiwan’s de facto embassy in Washington as the “Taiwan Representative Office,” a move certain to rankle the Chinese communist regime.

It is currently called the Taipei Economic and Cultural Representative Office (TECRO), using the name of the island’s capital city.

Should the measures become law, any change in the office’s name could provide cover to smaller countries to take similar steps to boost engagement with Taiwan.

It would also be certain to create a new rift in U.S.–China relations, already at their lowest point in decades as Washington seeks to push back against what it sees as Beijing’s growing economic and military coercion.

The United States, like most countries, does not have official ties with democratically governed Taiwan, but is its biggest international backer.

The bills direct the Secretary of State to “seek to enter into negotiations” with TECRO to rename its office as the “Taiwan Representative Office.”

“The U.S. must make clear that, despite all efforts by the Chinese Communist Party to intimidate and coerce Taiwan, hostile powers have no right to claim sovereignty over democratic countries,” Rubio said.

Menendez told Reuters the bills were consistent with the Taiwan Relations Act defining the United States’ unofficial ties with Taiwan, and demonstrate Washington’s support for Taiwan “to determine its own future.”

“We must take this step to strengthen our diplomatic partnership with Taiwan and counter China’s repeated attempts to threaten and coerce nations around the globe,” Pappas said.

The White House and U.S. State Department and the Chinese embassy in Washington did not respond immediately to requests for comment.

The Chinese regime downgraded its diplomatic relations with Lithuania and pressed multinationals to sever ties with the country after Taiwan opened an office in Vilnius last year called the Taiwanese Representative Office in Lithuania.