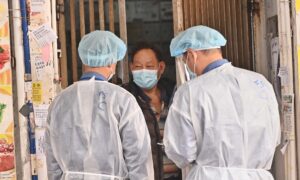 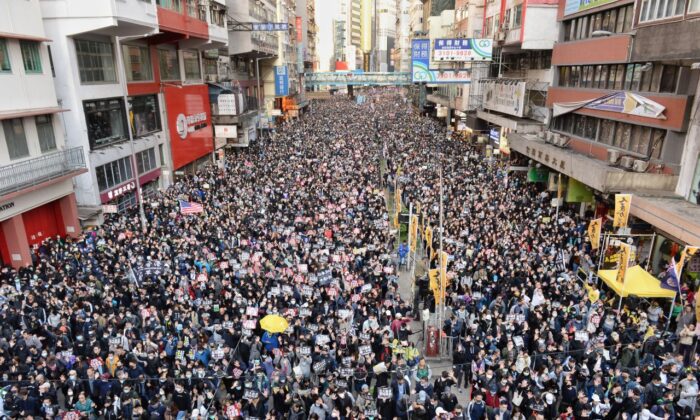 Tens of thousands of protesters march in the streets in Causeway Bay in Hong Kong on Dec. 8, 2019. (Sung Bi-lung/The Epoch Times)
US News

A bipartisan group of U.S. lawmakers has nominated Hong Kong’s pro-democracy movement for the 2021 Nobel Peace Prize to recognize “all those who have built and maintained human rights and democracy” in the city.

“We are nominating a movement that has peacefully advocated for and maintained human rights and democracy in Hong Kong since 1997 and continues to fight against the erosion of these rights,” a group of lawmakers led by Sen. Marco Rubio (R-Fla.) and Rep. James McGovern (D-Mass.) wrote in a letter (pdf) to Berit Reiss-Andersen, chair of the Nobel Peace Prize committee, dated Jan. 31.

“A number of democracy advocates are already in jail, some in exile, and many more awaiting trials where they are expected to be convicted and sentenced in the coming months for the sole reason of peacefully expressing their political views through speech, publication, elections, or assembly,” the group, all members of the U.S. Congressional-Executive Commission on China, wrote in a letter published Wednesday.

Proud to nominate the #HongKong pro-democracy movement for a 2021 Nobel Peace Prize. It’s important to uplift & highlight those who—in spite of great obstacles—work to promote human rights and democracy. https://t.co/qDVpPly6Gp

The letter states that the nomination is to “give voice to those fighting in recent years against the erosion of rights and freedoms guaranteed to Hong Kong’s citizens by international treaty and the city’s constitution.”

It cites recent efforts by the Chinese Communist Party (CCP) and its allies to “actively suppress voices for human rights and democracy,” noting that many pro-democracy activists are either in jail or exile “for the sole reason of peacefully expressing their political views through speech, publication, elections, or assembly.”

The nomination comes months after Beijing warned against anyone “politicizing” the award. During a visit to Norway half a year ago, Chinese Foreign Minister Wang Yi warned against giving the Nobel Peace Prize to Hong Kong pro-democracy activists.

“In the past, today and in the future, China will firmly reject any attempt by anyone to use the Nobel Peace Prize to interfere in China’s internal affairs,” Wang told reporters. “The position of the Chinese side is rock firm on this principle.”

The Chinese regime has also warned the United States multiple times against “interference in [China’s] internal affairs in Hong Kong” and elsewhere.

Just this week, Yang Jiechi, head of the Chinese Communist Party’s Central Foreign Affairs Commission called on the United States to “stop interference in the affairs of Hong Kong, Tibet and Xinjiang, which all matter to China’s sovereignty and territorial integrity.”

Nearly 100 people in Hong Kong have already been arrested under the CCP’s sweeping national security law, which was imposed on June 30, 2020, and punishes vaguely-defined crimes such as secession and subversion of the one-party communist state.

In December 2020, prominent Hong Kong activist Joshua Wong and two of his longtime colleagues were handed prison sentences for their roles in a mass protest that occurred in front of the city’s police headquarters in 2019.

During the 2019 demonstration, thousands of protesters besieged the police headquarters in Wan Chai district, blocking nearby roads and entrances into the building. They gathered to oppose an extradition bill that would have allowed people in Hong Kong to be sent to mainland China for trial. The extradition bill has since been scrapped.

The lawmakers’ letter concludes by saying that a Nobel Peace Prize would honor the Hong Kong pro-democracy movement’s “bravery and determination that have inspired the world.”

The winner of the prize will be announced in October, and the award will be presented in December.