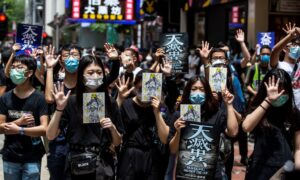 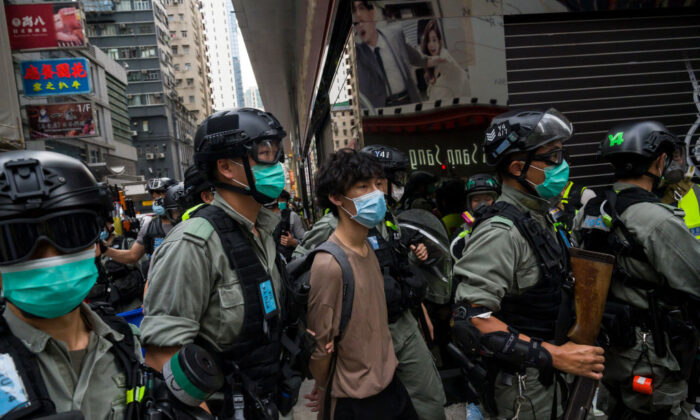 Hong Kong protesters are arrested by riot police during a rally against China's national security law at Mongkok district in Hong Kong on May 27, 2020. (Billy H.C. Kwok/Getty Images)
China-US News

“I commend our Senate counterparts for moving quickly to address Beijing’s unilateral move to impose a new national security law after years of unsuccessful attempts to use the local Hong Kong legislature to pass other anti-democracy measures,” said Sherman in a press release.

The bill, named the Hong Kong Autonomy Act, is the House version of a Senate bill (S.3798) introduced by Sens. Pat Toomey (R-Pa.) and Chris Van Hollen (D-Md.) on May 21. It proposes authorizing sanctions on foreign individuals who are on an annual list of people found to be involved in subverting Hong Kong’s autonomy.

The security law would ban activities the Chinese regime considers related to secession, subversion, terrorism, and foreign interference. Beijing’s security agencies would also be allowed to set up operations in Hong Kong.

The NPC’s standing committee will draft details of the law before it is added to Annex III of Hong Kong’s mini-constitution, the Basic Law.

The House bill proposes that a list of people violating Hong Kong’s autonomy be economically sanctioned. If those individuals are identified as repeat offenders, the U.S. State Department would be authorized to seize property and ban them from entering the United States.

The State Department would also identify foreign banks that have done significant transactions with Chinese officials found to be undermining Hong Kong’s autonomy, to be “subjected to a range of financial sanctions that the president can choose from,” according to the press release.

If these banks are identified again a second time, they would face sanctions such as the denial of access to loans from U.S. financial institutions and the prohibition of dealing in U.S. government debt.

“Congress must act to support the residents of Hong Kong, and uphold the key obligations that China made to Hong Kong in the Joint Declaration and the Basic Law,” Sherman said.

Yoho criticized the Chinese Communist Party (CCP) for its “complete disregard” of the Sino–British Joint Declaration, which outlined Hong Kong’s future upon its transfer of sovereignty to China from Britain in 1997 and guaranteed a high degree of autonomy.

“By destroying any sense of autonomy in Hong Kong, the CCP has admitted to the world that ‘one country, two systems’ does not work, and it will resort to underhanded tactics and the use of force in getting what they want,” Yoho said.

Secretary of State Mike Pompeo told the American Enterprise Institute on May 29 that Washington was considering allowing people from Hong Kong to seek refuge in the United States following Beijing’s law. He didn’t provide details for the plan, such as immigration quotas or visas.

UK foreign secretary Dominic Raab said on June 2 that if China follows through with the Hong Kong law, the UK would allow British national overseas passport holders to come to the UK and extend their stay indefinitely, “thereby also providing a pathway to citizenship.”

Hongkongers born before the territory reverted to Chinese rule in 1997 have such passports.

The Hong Kong government issued a press release on June 2, saying that a group of local top officials, including Hong Kong leader Carrie Lam, Secretary of Justice Teresa Cheng, and Secretary of Security John Lee, will leave for the Chinese city of Shenzhen that evening. The government didn’t provide details about their schedule in Shenzhen.

Lam will then travel to Beijing on June 3, when Beijing “will listen to Mrs. Lam’s views” on the national security law. She is expected to return to Hong Kong in the morning of the following day.

At the time of writing, it’s not known whom Lam will meet while holding talks about the security law.