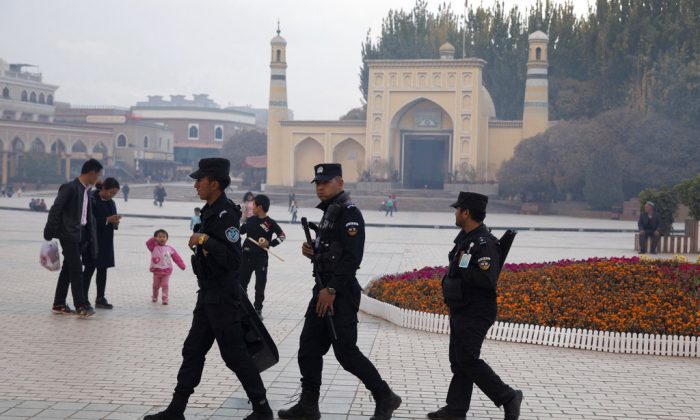 US Lawmakers Call on Trump to Help Detained Muslims in Xinjiang

The group proposed legislation on Oct. 10 that would urge Trump to condemn “gross violations” of human rights in the Xinjiang region, where the U.N. estimates that as many as 1 million Uyghurs and other predominantly Muslim minorities are being held in arbitrary detention. It would call on Trump to press his Chinese counterpart, Xi Jinping, to close the “political re-education camps” immediately.

The legislation, proposed by the Congressional-Executive Commission on China, would also support an existing push for sanctions against Xinjiang Communist Party chief Chen Quanguo and other officials under the Magnitsky Act, which would prevent Chen from entering the U.S. and freeze any assets he has in U.S. banks.

The bipartisan congressional commission monitors human rights and the rule of law in China.

Chinese authorities have denied that the internment camps exist but say petty criminals are sent to “employment training centers.” On Oct. 9, the Xinjiang government revised legislation to officially permit the use of “education and training centers” to reform “people influenced by extremism.”

A new clause directs the centers to teach the Mandarin language, occupational and legal education, as well as “ideological education, psychological rehabilitation and behavior correction.”

“It’s a new form of re-education that’s unprecedented and doesn’t really have a legal basis, and I see them scrambling to try to create a legal basis for this policy,” said Leibold, an expert on Chinese ethnic policies at Melbourne’s La Trobe University.

Maya Wang, senior China researcher at Human Rights Watch, said in a statement that “no tweaks in national or regional rules” can change the nature of the camps.

The measures proposed by U.S. lawmakers come as U.S.-Chinese relations have deteriorated amid a growing tariff dispute over American complaints about Beijing’s technology policy.

Beijing has spent decades trying to suppress pro-independence sentiment in Xinjiang fueled in part by frustration about an influx of migrants from China’s Han majority.

The congressional measure calls for the creation of a State Department post to coordinate financial and diplomatic responses, a database for U.S. residents to provide details about missing family members and an expedited asylum process for the affected minority groups.

The congressional commission also warned in an annual report on Oct. 10 of the “long arm” of an “ascendant and increasingly aggressive” China.

The 300-page report describes a “downward trajectory” on human rights since Xi took power in 2012. It says the ruling party is “trying to redefine” human rights and “basic human dignity.”

“China’s authoritarianism at home directly threatens our freedoms as well as our most deeply held values and national interests,” said a statement by Sen. Marco Rubio, a Republican from Florida, and U.S. Rep. Chris Smith, a Republican of New Jersey.

The EU is “deeply concerned by credible reports pointing to a serious deterioration” of human rights, said a statement by the 28-nation bloc’s chief foreign policy official, Federica Mogherini.

Mogherini called on all countries to carefully consider asylum requests.

Omir Bekali, who was profiled by The Associated Press in May, is named in the proposed legislation as among those who have testified to the indoctrination, humiliation, and indefinite detention of internees.

Detainees were ordered to chant “Thank the Party! Thank the Motherland!” before meals, according to Bekali, a Chinese-born citizen of the central Asian nation of Kazakhstan.

The congressional commission is also seeking information from the FBI on Chinese activity on U.S. soil. American citizens and Chinese students and other U.S. residents say they have been harassed over Xinjiang, the commission said in a letter to FBI Director Christopher Wray.

Uyghurs in Istanbul, Turkey, told the AP this year that Chinese authorities asked them to spy on fellow Uyghurs abroad in exchange for information about family members in Xinjiang.