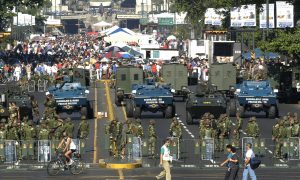 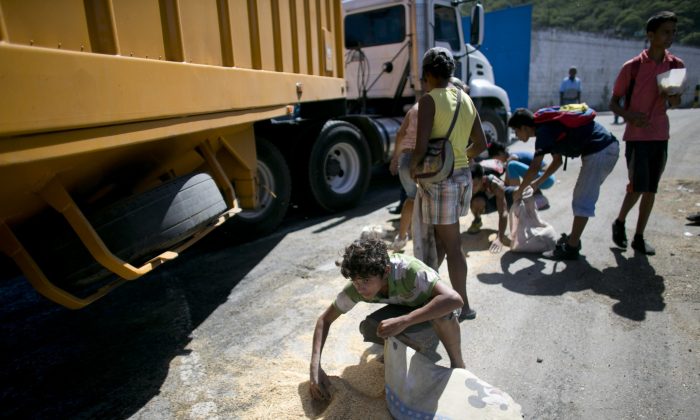 FILE - In this Nov. 14, 2016 file photo, a youth uses his pillow as a bag to collect rice from the pavement that shook loose from a food cargo truck waiting to enter the port in Puerto Cabello, Venezuela, the port that handles the majority of Venezuela's food imports. The calls by members of Congress on both sides of the aisle to sanction Venezuelan officials for profiting from food shortages come in response to an Associated Press investigation that found trafficking in hard-to-find food has become big business in Venezuela, with the military at the heart of the graft. (AP Photo/Ariana Cubillos, File)
International

US Lawmakers Call for Action on Venezuela Food Corruption

CARACAS, Venezuela—Venezuelan officials may face U.S. sanctions for profiting from food shortages that have exacerbated hunger in the South American country.

The calls by members of Congress on both sides of the aisle come in response to an Associated Press investigation that found trafficking in hard-to-find food has become big business in Venezuela, with the military at the heart of the graft. Embattled socialist President Nicolas Maduro has given the military increasingly broad control over the food supply as shortages have led to widespread malnutrition this year.

“When the military is profiting off of food distribution while the Venezuelan people increasingly starve, corruption has reached a new level of depravity that cannot go unnoticed,” said Democratic Sen. Ben Cardin of Maryland, the ranking member of the Foreign Relations Committee.

The AP report published last month detailed a chain of dirty dealing by the military, including kickbacks to generals for food contracts and bribes to move food out of the port. Some of the food is purchased in the U.S. and some of the bribes passed through the U.S. banking system.

U.S. prosecutors are investigating senior Venezuelan officials, including members of the military, for laundering riches from food contracts through the U.S. financial system, the AP learned from four people with direct knowledge of the probes. No charges have been brought.

“This should be one of President Trump’s first actions in office,” Rubio, who is chairman of the Foreign Relations subcommittee that oversees Latin America, said in a statement.

The Associated Press cited documents and testimony from business owners who pointed to food minister Gen. Rodolfo Marco Torres and his predecessor, Gen. Carlos Osorio, as key figures involved in fraudulent food imports. Neither official responded to requests for comment, but in the past, both have dismissed charges of corruption as empty accusations propagated by political opponents.

Congresswoman Ileana Ros-Lehtinen, R-Florida, said she is urging the State and Treasury Departments to apply sanctions to Marco Torres and Osorio, as well as anyone else getting rich off Venezuela’s food shortages. She is also asking that government agencies ensure U.S. companies are not doing business directly with any Venezuelan business owners fronting for corrupt officials. Sen. Bob Menendez, D-New Jersey, joined her in calling for those involved in food corruption to be held accountable.

In 2014, the Obama administration, at the urging of Rubio and Menendez, froze U.S. assets and denied visas for top Venezuelan officials accused of drug trafficking and of human rights violations during a wave of anti-government protests. Maduro responded by calling the U.S. lawmakers “terrorists” bent on destabilizing the oil-rich nation, and banned them from Venezuela.

Venezuelan lawmaker Carlos Berrizbeitia, who sits on the congressional audit committee, said sanctions or no, the opposition will do all it can to stop officials from participating in food trafficking.

“We welcome help from any country interested in investigating corruption in Venezuela, but we also have to keep up pressure on our own institutions to make sure they function properly,” he said. “We need to do everything possible to ensure they don’t rob a single dollar more from the food budget while the country is going hungry and people are eating from the trash.”

The Maduro administration rarely acknowledges accusations of corruption inside the military, and has not responded to the AP report. When he shook up his cabinet this month, replacing more than a dozen ministers, he kept Marco Torres at the helm of the Food Ministry.

Transparency International Chair Jose Ugaz said the lack of government response was in itself telling.

“It’s powerful that there’s been no reaction to such a strong report,” he said.

The story about corruption in the food supply under a socialist government sparked discussion even among Venezuelan leftists on the popular Aporrea website.

“Look at the disaster Carlos Osorio made of the Ministry of Food, and there were no consequences, just removal from office,” Esmeralda Garcia wrote on Aporrea. “This has become a third rail that you can’t bring up for discussion, because it’s an open secret and no one does anything.”

The issue of corruption also raised tempers in food lines, which have sprouted across Venezuela.

“It’s out in the open now; the officials have no respect for the people,” said Manuel Blanco as he waited in an hours-long line to buy rice. “They’re running their schemes and we’re the ones affected. We’re out here trying to live on soup and mashed bananas.”

“What makes you mad is they don’t leave anything to take to your children,” added Yanet Montilla, who had lined up next to Blanco at dawn in hopes of buying food for her three daughters. “But what are we going to do? We all have families and can’t risk getting killed in the street.”